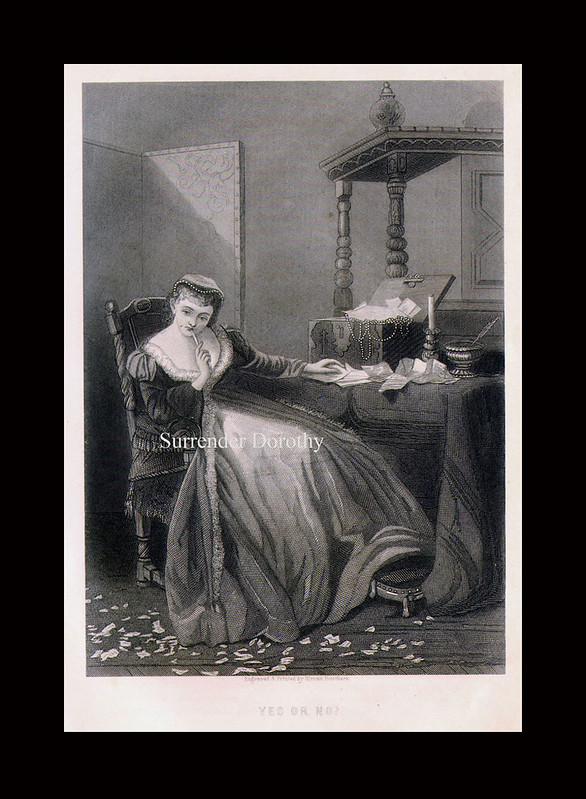 The engraving “Yes or No?” depicts a woman deeply contemplating a decision (presumably a marriage proposal) and writing and rewriting the letter with her response. Her desk is in disarray and there are torn up pieces of paper around her on the floor as she sits at the desk looking troubled. She also has several pages of letters on her desk, messily strewn around. When I first saw this image, I was curious as to what this etching said about a woman’s agency in the Victorian Era. In one sense, she (presumably) has a decision to make whether she wants to marry him or not. However, at the same time, the fact that she is clearly unable to make the decision strips her of that same agency because she can’t make up her mind.

This image reminds me of when Laura went to Sir Percival to tell him that she loved someone else because these depictions of agency in women are different.. While Laura ultimately lacks agency, she tries to give Sir Percival an option in order to control her own destiny. Laura did not have much, if any choice in whether or not she was to marry Sir Percival even though she tried because she was in love with Walter. In the image, the woman does have the power to say yes or no but can’t make up her mind.

Both Laura and the woman in the etching lack agency but for different reasons. Laura doesn’t have power over her own fate but this woman does. However, this woman’s inability to make up her mind strips her of that agency and depicts her as if someone has to make the decision for her (presumably a male). If a woman needs to rely on some one else to make her decisions, she doesn’t have very much agency at all. So, while these two different characters or images of women are slightly different in their agency, they both ultimately lack control over their own lives.

The etching, “Salammbo,” depicts a naked woman, presumably dead, as an anaconda wraps itself around her body. There is also a man sitting behind the woman with a sitar or similar instrument in hand, presumably charming or controlling the snake. The woman is pale, with her hair billowing out behind her head. The setting is somewhere in the east, based on the clothing of the man and the background of the image. This etching portrays the “dangers” of the east, as a snake charmer possesses a snake which is wrapping itself around a defenseless, naked, exposed, and dead woman. We can assume this woman is supposed to be from the west because of her incredibly pale skin.

In The Woman in White, Count Fosco has a strange relationship with his animals. he has birds and mice which he calls his “children” and he either has them very well trained, or has some sort of mystic power over them. Count Fosco is from Italy, a foreigner in the context of this novel as it takes place in England. It is also worth mentioning that Count Fosco is arguably the main antagonist in this novel and the most threatening character to Laura, the stereotypical pale and fragile female character. Count Fosco is the mastermind behind the scheme to take Laura’s money as he manipulates everyone else. There is also a common rhetoric of Count Fosco being able to “tame anything” reinforcing the idea of him having control of people, but also animals in this story (Collins 217).

There is a common theme between “Salammbo” and the character of Count Fosco as an obsession with “the other” in relation to animals. In both cases, the foreigners have power or control over animals in a mystic or mysterious way. The English obsession with “the other” as a threat with mystic abilities was a common trope in art and literature. The snake charmer and Count Fosco’s similar ability to “tame” animals reinforces the idea of foreigners having power over animals, bringing in themes of “the exotic” as well. The Woman in White follows appears to follow a variation of “the marriage plot” from the Victorian Era. However, upon closer inspection, it becomes clear that the novel only echoes the marriage plot, leaving room to question the institution of marriage itself, therefore almost entirely dismantling the marriage plot. When Laura and Marian are reunited, after Laura had been away with her new husband Sir Percival, Laura exclaims to her sister, “How often you have made me mock-speeches of congratulation on my wealth! Oh, Marian, never laugh again. Thank God for your poverty- it has made you your own mistress and has saved you from the lot that has fallen on me” (Collins 258). Laura very clearly denounces marriage because of her own misery, expressing her opinion that it would be better to be a mistress than to be married, or, at least, married to Sir Percival. This is particularly interesting given that there was a common sentiment that there was an overabundance of women who were unmarried in England at this time, as expressed by William Rathbone Greg. Laura’s distress in her marriage causes her to believe that it would be better to not be married, even though it there was a perceived societal notion that being a single woman was a horrible thing to be. This inherently questions the institution of marriage by showing a woman in an unhappy marriage, wishing she could be released and envying her sister who remained unmarried. The rest of the novel continues to question conventional marriage as Sir Percival’s motives are revealed, and later, when Laura and Walter get “married” even though no one knew she was still alive at that point. This begs further questions of what exactly constitutes as a marriage, further challenging the conventional “marriage plot” and the institution of marriage.

The relationship between Miss Halcombe and Mr. Hartright is amicable from the beginning of their time together. Although Miss Halcombe expresses her feelings for Mr. Hartright, he is in love with her sister and so their relationship remains a friendly one and nothing more. However, their relationship is more complex than that, as Mr. Hartright relies on Miss Halcombe for support, particularly once she tells him that Miss Fairlie in engaged. Once she tells him that her sister is engaged, Mr. Hartright is devastated as her felt a, “dull numbing pain” (Collins 72). Both Mr. Hartright and Miss Halcombe, who can see the pain on his face, express that the pain has momentarily wiped Mr. Hartright of his masculinity. Miss Halcombe says, “Crush it […] don’t shrink under it like a woman. Tear it out: trample it under foot like a man” (Collins 73). Interestingly, Miss Halcombe challenges Mr. Hartright’s masculinity by insinuating that if he lets his pain persist, he will be feminine. This is interesting because Miss Halcombe, as a woman, is reinforcing gender stereotypes throughout the book thus far of feminine weakness, while acting as a strong, more stereo-typically masculine character. By telling Mr. Hartright that pain is feminine, she buys into and promotes the stereotypes of feminine weakness and masculine strength while simultaneously portraying a woman who does not uphold very feminine stereotypes. Miss Halcombe’s language violent demands of Mr. Hartright when she tells him to “crush” and “rip out” come with a connotation of destruction and violence, followed by the insistence that if he “crushes” his pain, he will be a man. Here, manliness is associated with violence and overpowering/ destroying weakness (pain). This adds to the concept of gender roles which runs throughout the book. It gives us insight into what the characters believe masculinity and femininity look like.  Mr. Hartright agrees with Miss Halcombe’s sentiment saying, We both waited for a minute, in silence. At the end of that time, I had justified her generous faith in my manhood” (73). Interestingly, Mr. Hartright almost admits to not being as masculine as Miss Halcombe gives him credit for because he describes her words to be “generous” implying that he may not believe them entirely himself. However, he did gather himself enough to “justify” her confidence in his masculinity. This exchange between these two characters both emphasizes and challenged gender stereotypes, adding to the complex dynamics of gender roles throughout the novel.