Last night, CMC Nashville, TN. put on an awesome show! The organization is a ‘study abroad’ program that teaches students for a semester all the details of putting on a show: set up, technical production, choreography, songwriting, etc. Their final exam is going on tour around the U.S., and one of their stops this year was Dickinson!

Each performance featured a lead singer, guitarist, bassist, backup singers, keyboardist, and drummer; and some acts included trumpets and trombones. Every part of each of the dozen acts were completely original and created by the students themselves.

The concert had all different genres: punk, pop, indie, metal, rap, and others! There was something for everyone to enjoy. The students put on amazing performances and our DJs and the audience loved it. We hope to see them again next year (or even next semester…). 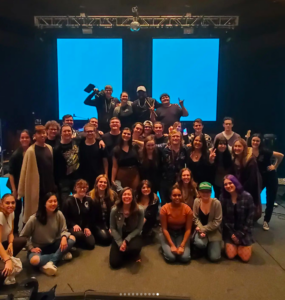 On Saturday, December 26th, AJR hosted their first full livestreamed concert. I’m not normally a big fan of livestreamed concerts, but this was something different. It was hosted on VENEWLIVE which presents a more interactive interface than Facebook or Instagram Live. For example, the viewer can rotate between different camera angles and chat with other audience members. Viewers can also cheer, stomp, and applause which are played at the end of each song. Fun fact – AJR themselves created the cheering sound effects! (see their TikTok or Instagram for more @ajrbrothers). I’ve been to two AJR concerts, one for The Click and one for Neotheater. Both times I was absolutely blown away by the level of dedication and creativity the brothers show to their music and to their audience. Thus, I was really intrigued to see how they would pull off a virtual concert experience. The show started out with a FANTASTIC overture containing pieces from AJR’s entire discography. As a big AJR fan, I was a little sad that they did not include an overture on their Neotheater album like they did on Living Room and The Click, so, to me, this was the perfect way to kick off the night. The band played through a good portion of their Neotheater album while also throwing in some bigger hits like “Weak,” “Sober Up,” “Burn the House Down,” and (perhaps their biggest hit yet) “Bang!” They also debuted a new song, “My Play,” which will be part of their upcoming album OK ORCHESTRA.

Just like with any in-person concert, there were also tons of lighting effects like strobe lights and laser beams in addition to the songs themselves. Similar to their Neotheater tour, AJR also used a giant projector screen which Jack, the lead singer, interacted with. However, I think the coolest stunt they did was having Jack suspended mid-air with wires and making it look like he was walking on a laser beam. In a way, I think certain visual effects could have only worked in this virtual setting, as you would have had to look at the stage from just the right angle to make the effect look real. That’s what I really like about AJR. They took this virtual concert space and were like, “Okay, the audience can’t really be there, so how do we make this an experience worth watching and how can we take advantage of this virtual setting?” One of my favorite moments of the night was when Ryan broke down the production of “Bang!” AJR does a song breakdown in every concert they do, so it’s always fun to guess which one will be featured. “Bang!” was a little tougher to guess than past ones because it honestly sounds like a standard pop song until you hear that tell-tale marching / swinging rhythm and trumpets. I loved how Ryan started with the simple, everyday sound of a door knock, and added in elements piece by piece until he created a whole song. It was like watching them produce a song right in front of us.*

*if you’re into music production or really love song breakdowns,  I highly suggest checking out AJR’s Youtube channel where Ryan opens up their ProTools setup and breaks down acouple of different songs.

All in all, AJR’s One Spectacular Night was indeed spectacular. While nothing can be the same as moshing to “Weak” with hundreds of other people, the band did a fantastic job putting together and performing a virtual show. Everything from the song selection to the visual effects to the stunts was completely captivating and I’m really glad I decided to go.

If you’re looking for the latest from AJR, check out “My Play” and make sure to keep an ear out for their upcoming album, OK ORCHESTRA, which drops March 26th, 2021.