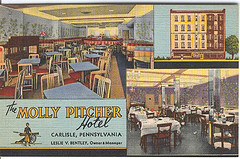 The Molly Pitcher opened up on July 1, 1919 and was once located on South Hanover Street. In this American Hotel Corporation advertisement the hotel is described as such, “The Molly Pitcher is central and quiet, opposite the Court House and half a block from the Square, the center of activity and the hub of automobile travel. The only modern hotel not along the railroad tracks. No passing trains to disturb sleep and no dances or late banquets.” During the 1920’s the Molly was known as one of the more luxurious places in Carlisle. It set the bar for dining and entertainment. When asked to describe the Molly Pitcher, Marguerite Grove-Harnish said, “The Molly Pitcher, when you mentioned that you wanted to go to dinner at a special place, that’s where you would think of going. As you entered the lobby you could tell that you were in a more elegant place.” [audio:marg-clip.mp3]

Many people felt this way about the Molly Pitcher Hotel. An article in the Patriot News written in 2004 by Dan Miller discusses the closing of the Molly Pitcher in this an older women by the name of Kathryn “Dolly” Morton describes going to the Molly Pitcher Hotel to dance. Former owner, Jim Costopoulos is quoted saying, “In the 30’s and 40’s, it was ‘the cat’s meow… a high class hotel…”[i] The Borough Council President Frank Rankin quotes in this article from a 1919 new paper article “The Hotel was a downtown ‘gem’ when it opened…”[ii] Carlisle was a very different place than it is now during the 1920’s . For one, people were not as mobile in the 20’s and 30’s. Many people would come into Carlisle’s downtown by train. Carlisle had a railroad that ran directly across High Street. During this time period people were trying to come into the downtown area, not away from it. Transportation played a big role in the changing landscape of all downtown areas. This includes the automobile and the raise of motel and interstate culture during the 50’s. These are just some of the broader factors that affected the Molly Pitcher during certain time periods.

So what happened to Carlisle “gem” exactly? It is currently an apartment building for Senior Citizens. Before this it was veiwed as the slums. Drugs, rape, and robbery were not uncommon, “The Molly was now plagued with intruders, some looking for or selling crack, others wanting a bathroom floor on which to spend the night.” (Miller, The Molly) The business started to decline during the 50’s that pattern continued up until January 2004 when the development Authority purchased the property from Jim Costopoulos for $600,000.

The Molly Pitcher underwent many significant changes within the 85 years it ran as a hotel and the Carlisle community was also a reflection of these changes. One significant change happened when the hotel became “permanent-type occupancy” on the 60’s. The types of people that moved in couldn’t afford to live anywhere else. The cost of living increase and the decline of employment in the area decreased. Those that lived in the Molly could hardly afford to eat let alone pay their rent. During the 1960’s and 70’s there is an increase in human services within the area.

Elaine Livas, director of Project S.H.A.R.E, started her services at the Molly Pitcher Hotel. She provided those in need with food and clothing. Livas, a Dickinson Alum, class of 83′ talks about the need for human services in places like the Molly Pitcher and the importance of providing to those that are less fortunate than you.

The history of the Molly Pitcher Hotel is fascinating because it tells a story of a place that was once viewed as glamorous and luxurious. It also tells a story about the time period culturally and socially by the stories of the people who stayed there. The story of the Molly Pitcher helps one form a social and cultural critique on the decline of the downtown through the lens of history.

7 Responses to The Molly Pitcher Hotel