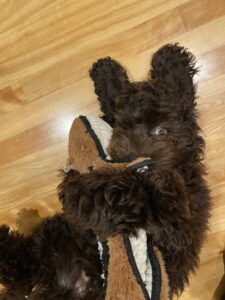 There are many benefits to giving your dog toys to play with. First, it makes them happy, and they have fun. This is very important and what owner doesn’t want their dog to be happy? Second, since dogs naturally love to play, without toys to play with they will find other objects to use. This could include shoes or clothes, and many other things that you wouldn’t want them biting and playing with. Toys are a great replacement and will help teach your dog what can be played with and what can’t. They can also be used as a reward system, when your dog responds to a command correctly, you can give them a toy to play with. Lastly, playing tires dogs out, therefore, after they are done using their toys, they will be able to fall asleep much easier.

A study was done comparing dogs that were given toys to play with against dogs who weren’t given a toy. The dogs were each given a Kong and a stuffed dog with treats inside of it. The study observed overall activity levels in the dogs and their barking over time. The researchers found that the dogs who were given toys were more active than the ones who weren’t. In addition to that, the dogs that received toys appeared to bark less often. It is clear from this study that dogs who play with toys everyday will behave better and be more active as a result.

Teddy loves toys, his favorite is a stuffed squirrel that has a squeaker inside of it. He really enjoys it when you throw the squirrel for him to chase, and then when he brings it back, he likes to play tug of war. He never gets tired of this. Another toy that he enjoys is the Kong. Although, you do have to put some kind of food inside of it for him to try to get out. This is a great way of distracting him for a while. Whenever we leave the house, we leave him a Kong with something inside. Teddy has a ton of energy and giving him toys is a great way to distract him and tire him out easily. Overall, toys are great for dogs in many ways, and can be a simple way for owners to improve their dog’s behavior and distract them at the same time.