Have you ever wondered why your dog becomes so anxious and scared by the noise of fireworks? Ever since the first Fourth of July with my dog, I was curious as to why the thunderous noise hurt dogs’ ears so much, and what characteristics lead a dog to be more affected by the firework noise.

The fear of fireworks in dogs is common. The author of the article “Not a one-way road—Severity, progression and prevention of firework fears in dogs,” gave out surveys and did research on dogs and their fears of fireworks. In this article the author explained that through survey answers that more than half of the dog population has some sort of firework fear. Riemer goes over many factors that contribute to a dog’s angst for fireworks as well as how the fear progresses. After reading the article I believe the most crucial factor in a dog’s fear of fireworks is age. The author came to the realization that dogs develop their fear of fireworks, most commonly, before the age of one. “Given that the age group of dogs having reached one year was the largest in the sample, data from this age group are also likely to be most reliable. The second largest group of dogs developed noise fears at the age of one year, followed by two years and three years, respectively” (Riemer, 2019). As the dogs became older, the odds they developed a fear of fireworks diminished significantly. It was seen that by the age of six, an exceedingly small number of dogs were still developing fears of fireworks. 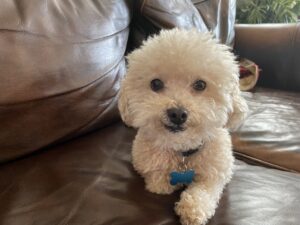 My dog Charlie has had a fear of fireworks from a noticeably early age. On his first Fourth of July, he was just a little bit older than one. He was terrified and hid in my mom’s arms and cried the duration of the show. After nine years, at ten years old, he is still petrified by the booming noises a firework creates. Each time a holiday comes around and we know there are going to be fireworks, we make sure someone in the family is holding Charlie so that he knows he is safe. His fear has not wavered throughout the years; it has stayed the same.

In the article I also read about how the author compared different noises that may also affect a dog’s ears and make them fearful. Some sounds were thunder, gunshots, and motor noises. It was quite common that if a dog was afraid of fireworks that they were also afraid of at least one of these other noises. Before the Fourth of July rolled around, there had been many thunderstorms that caused Charlie some major fear and anxiety. We wish there were something we could do for Charlie to ease his worry, but we will continue to comfort him each time there is a firework show.