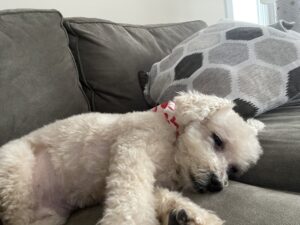 Have you ever noticed that after being around a dog that isn’t yours, your own dog becomes jealous? Personally, my dog Charlie becomes very jealous when I do this. For example, when I arrive home after spending time with another dog, Charlie will run up to me and smell me frantically and then leave me and not spend time with me, like a punishment. I have always wondered if other dogs get jealous like he does and why this occurs. An experiment was conducted to see if there would be findings to support that dogs can experience jealousy (Harris et al, 2014).

In this experiment, the dogs were tested individually in their homes, and they were less than 35 pounds and no taller than 15 inches. The reason for having a sizing requirement was because they thought it would be possible the dogs could become aggressive due to jealousy and smaller dogs are more easily controlled. The experimenter explained to the owners that they would need to perform a series of actions to see their dogs’ reactions. The experimenter also explained that if the owner believed their dog would respond negatively or aggressively, to not participate in that specific activity. There were 36 dogs in the experiment, with a wide variety of breeds tested. To ensure that the responses were accurate, each of the activities were recorded and lasted for one minute. After each of the activities, the owner wouldfill out a questionnaire based on what they observed. There were three different activities performed and they are called “Stuffed Dog”, “Jack-o-Lantern”, and “Book” (Harris et al, 2014).

In the first activity “Stuffed Dog”, owners had the task of interacting with a fake stuffed dog, that looked extremely realistic. This stuffed dog would whine, bark, and wag its tail with the press of a button on its head. With this activity, the owner had to also completely ignore their own dog which was present in the room during the interaction. In the second activity “Jack-o-Lantern”, owners once again had the task of interacting with a Jack-o-Lantern like they did with the stuffed dog, with their dog in the room. Lastly, the third activity, “Book”, owners had the task of reading a children’s book like they were reading to a child. The book had pop up melodies to trick the owner’s actual dog (Harris et al, 2014).

After watching back the videos of the activities, some different behaviors were noticed throughout the dogs. Some behaviors noticed were aggression, attention seeking. Attention seeking was immensely popular in the activities because the dogs would attempt to get between their owner and the prop to make them jealous (Harris et al, 2014). The experiment results showed that the dogs were jealous during all activities performed. For example, it was found that with all the activities performed the dogs were more likely to push/touch their owner or the prop than whine or bark. It was also found that close to all dogs had their tails up for all the activities. More than 75% of the dogs pushed/touched their owner or the prop during the “Stuffed Dog” activity (Harris et al, 2014). Overall, it was found that the dogs showed extreme jealousy with all activities, but more with the “Stuffed Dog” activity than the other two.

After reading the findings from the experiment, I believe my dog Charlie would have reacted in a comparable manner. For example, when I was younger, I received a robotic dog as a Christmas present. This robotic and fake dog would walk around on a leash with me and make whining and barking noises. I find this example of the robotic dog similar to the “Stuffed Dog” activity performed. Charlie was not a fan of my robotic dog. In fact, he hated it. Charlie would bark and whine and he would also sit in a position from 5 feet away looking like he was ready to pounce at any moment. It got to the point where I had to say goodbye to my robotic dog friend because of Charlie’s responses. Another example of Charlie being jealous is that any time I arrive home from a friend’s house who has a dog Charlie will come up to me and sniff me completely head to toe. Charlie would nudge his little nose all over me to smell that dog that I was paying attention to. 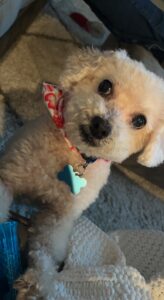