There are marked differences between the modern map of Ibn Battuta’s travels and the medieval map of his travels. The most obvious difference is that the modern map is intended to be geographically accurate and is made with satellite imaging. Ibn al-Wardi’s map was not intended to be geographically accurate but was meant to represent a cosmological understanding of the world. Because of this, the medieval map and travel route depicted on it is completely distorted. The distances between locations appears shorter than it is. It also represents bodies water in more abstract ways, not accurately depicting the coastlines and river distances. It makes the Nile River look incredibly wide when it is compared with the Arabian sea. Because bodies of water are distorted, medieval people’s understanding of the size and scope of them may not have been clear. There is also the issue of what the map is centered on. For the modern map, any place in the world can be chosen as the “center.” It is all arbitrary because it is a globe. When you click on the map, it automatically centers around the middle of the Arabian desert because that is the most central point in relation to all the points located on the map. The medieval map is completely different. Because it is a cosmological map, it has Medina and Mecca directly in the center. This indicates their importance and the centrality of Islam to life and their understanding of the universe. Medina and Mecca are towards the bottom of the modern map. Overall, it is interesting to compare the two maps because the intentions behind their creation and representation are completely different, which causes them to look different. It is important to note that the points I chose for Ibn Battutah are all located in the Middle East, which is shown at least semi-accurately on the map. If I had chosen points in sub-Saharan Africa, India, or China, the points would not have made any sense at all because these locations are distorted on the medieval map. 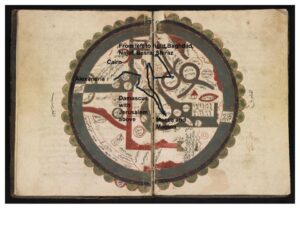 The Travels of Ibn Battutah: Baghdad

During his journey, Ibn Battutah stops in the city of Baghdad in modern day Iraq. Ibn Battutah comments on the cultural, religious, and communal locations that are noteworthy in the city. He also notes the general geographic layout of the city. Ibn Battutah spends around half of his writing about Baghdad speaking about the physical buildings and their characteristics, functions, and histories. Ibn Battutah starts by noting that Baghdad is nowhere near its former glory, having been sacked by the Mongols, but that it is still “the Abode of Peace and the capital of al-Islam.” This indicates that Ibn Battutah sees Baghdad as an influential city not only in its political influence, but in its religious influence. Ibn Battutah remarks that the Tigris River is the most beautiful thing left in Baghdad and speaks to its former glory.  Ibn Battutah continues by describing some of the popular locations in Baghdad. He speaks at length about the bath houses that are popular in Baghdad. Ibn Battutah describes the beautiful rocks and stone that are used in constructing them. He also compliments their ingenuity in designing the bath houses with “cubicles” so that no one has to share unless they wish, and everyone can retain their modesty. Ibn Battutah also talks about the location of the bazaars, saying that they are large and grand. Ibn Battutah does not only describe secular buildings, but also talks about religious buildings like mosques and colleges. Ibn Battutah mentions that there are 11 mosques that hold Friday prayer on the regular, and notes on which side of the Tigris they reside. He describes the Nizamiyah College, which has all four schools of Muslim jurisprudence, and talks about the accommodations they have there. Finally, Ibn Battutah talks about the king of al-Iraq who happened to be in Baghdad while he was visiting. He says that the name of this Sultan is Abu Sa’id Bahadur Khan and that his father was called Muhammad Khudabandah. Ibn Battutah explains that it was Khudabandah that converted to Islam. But about the current sultan, he says that he was young, beautiful, and generous, but was murdered by his gorgeous, but jealous wife after he married another wife.

Ibn Battutah’s description of Baghdad and his encounters there illuminates some of the issues he deems important to society. Ibn Battutah is always incredibly focused on religious matters. Ibn Battutah was a Muslim jurist so it makes sense that he is noting the location of mosques and the colleges for the education of jurists. But Ibn Battutah’s focus goes beyond the surface level, like with how he comments on the bath houses maintaining modesty and his acceptance of the punishment given to the sultan’s murderous wife. Ibn Battutah clearly took his job as a jurist seriously and cared about maintaining the correct morality for a Muslim society. Ibn Battutah also notes the important people in Baghdad, namely the sultan of Iraq. By naming the sultan and praising him, Ibn Battutah secures his own position of influence, because he reaffirms the structures in power.

During his trip to Ceylon, which is modern-day Sri Lanka, Ibn Battutah visits the town of Kunakar. Ibn Battutah begins his discussion of the town by talking about its physical geography. Ibn Battutah tells that the town was built in a valley alongside a river which is called the “Channel of Rubies” because precious gems are found in it. Later in the section, Ibn Battutah goes into more detail about the rubies. Ibn Battutah says that they are only found in Kunakar and are called bahraman or carbuncles. He explains that some of the gems are fished out of the channel while others are dug out of the ground. The stones that are dug have to be cracked open like a geode to find the gems inside, which Ibn Battutah says come in a variety of colors like red, yellow and blue. Ibn Battutah also discusses how valuable these rubies are to the people of Kunakar and how they wear them on necklaces and headpieces. Ibn Battutah describes two specific examples of ruby-wearing, when he talks about the sultan of Kunakar and when the talks about the women of Ceylon. The women of Kunakar wear rubies as elaborate adornments. Even the sultan’s slave girls have headdresses decorated with rubies. The other instance of ruby-wearing is the sultan of Kunakar, called the Kunar. The Kunar owns an elephant which he rides on important occasions and the elephant wears rubies on its head. Ibn Battutah comments that the elephant is the only white elephant he has ever seen in the world. Ibn Battutah also gives an anecdote on the Kunar. He reports that the Kunar’s subordinates revolted against him and blinded him, putting his son on the throne instead. Ibn Battutah tells one other anecdote about the town of Kunakar. Ibn Battutah describes how outside of Kunakar is the mosque of Shaikh Othman of Shiraz. Ibn Battutah tells that this Shaikh used to guide pilgrims to the Foot, which is now known as Adam’s Peak. Ibn Battutah reports that the Shaikh had his hands and feet cut off because he violated Hindu law by slaughtering a cow; but because the Shaikh was so respected in the community that they only mutilated him, while his sons and slaves took over as guides for the pilgrims.

Ibn Battutah’s interests in the section on Kunakar highlight how Ibn Battutah is fascinated by two things: wonders of the world and religious matters, specifically Muslim ones. Ibn Battutah focuses on how the Muslim Shaikh was respected in the community and was virtuous, even though he was mutilated. Ibn Battutah clearly cares about the state of Muslims wherever he visits and this includes Kunakar. In the case of wonders, the stories of the elephant and the rubies both count. The story of the elephant is meant to be sensationalist because the elephant is albino, would provides a shock factor to the reader. In the case of the rubies, it is a sensationalist story because the idea of having rubies the size of hen’s eggs and palms of hands is unthinkable to most people. It also expresses the wealth of the areas that Ibn Battutah is traveling to, which elevates his own status, because he is honored in the places he visits.