McDonald’s in France and in the US

Before boarding my flight to France, my last stop in the U.S. was dedicated to my beloved McDonald’s oreo McFlurry. Since I was little, my family would often stop by a fast food restaurant before dropping someone off at LAX. Whether that be McDonald’s, In-N-Out, or Chipotle, it was a nice way to get a quick snack by drive-thru, and eat our treats in the car. I boarded the plane and set out for my year-long study abroad in Toulouse. On the first day of our program, I was making my way to the Dickinson Center when I passed by one of the first McDonald’s I had seen in France thus far. To my surprise, almost everyone there was dining in! I was completely caught off guard to see that people were actually sitting down at McDonald’s, eating their fast food, talking with friends, and spending their time there as if it were any other lunch-break restaurant. Culture of McDo in America vs. France

I was taken by surprise because, McDonald’s in America is very much a fast-food experience. Firstly, American McDonald’s are always built with a drive-thru option: you will often find that the drive-thru has more cars waiting in line than the cars parked in the parking lot, which often causes the drive-thru experience to actually take longer than just going inside and ordering. Because people choose drive-thru over dine-in, it is much more common to see people munching on their fries in the car while they drive their meals back home. Or even, people will eat their burger and sip their coke while they drive to their meeting, trying to squeeze in a quick lunch in the middle of their busy day. Additionally, McDonald’s is virtually everywhere in America. Odds are, you can easily find one within a 15-20 minute drive from wherever you are, and if you’re in a big town or major city, there will surely be one just 5 minutes away from you. According to Statistica.com, there were around 13,900 McDonald’s in America in 2018. Lastly, McDonald’s in America is almost always a 24-hours establishment. They are open every single day, year-round, and even during major holidays. On the other hand, in France, it appears that the McDonald’s experience is treated much more as a dine-in opportunity, just like any other restaurant. Obviously McDonald’s is not the same as local restaurants that customize their menu-of-the-day to fit their fresh ingredients-of-the-day, but the principle of lunch and dinner goers taking their time to eat their meals and chatting with friends is basically the same. I’ve noticed that during lunch and dinner times, these McDonald’s are never empty; there is always a line of people waiting to order, and then struggling to find a place to sit. Even during non-peak meal times, I still always see people eating at the tables outside. These McDonald’s are also often located in popular areas where people walk and shop, so it is pretty uncommon to see one with a drive-thru option. 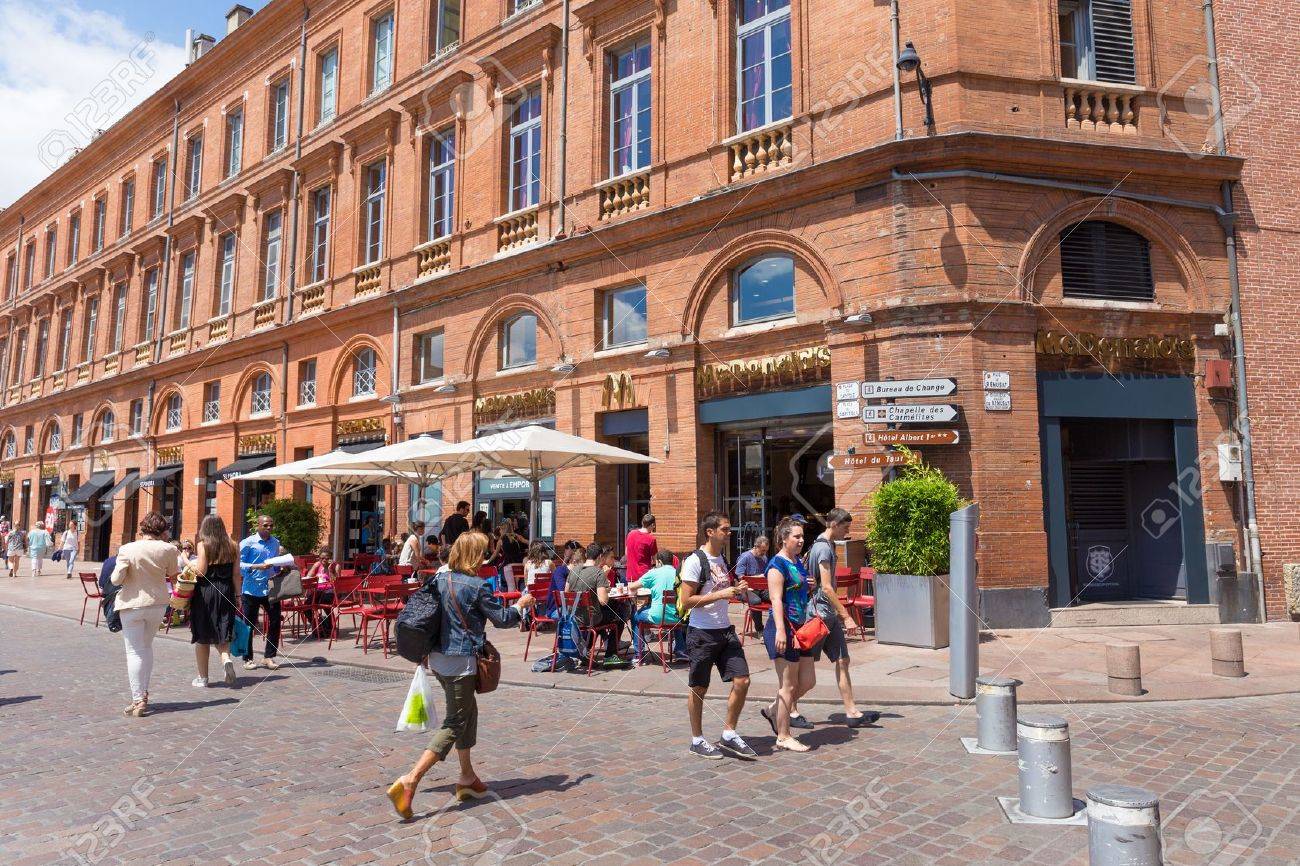 However, oddly enough, most of these McDonald’s actually have a small side window where people can order to-go in a drive-thru like feature, but basically replacing the cars with humans. In addition, McDonald’s is not quite everywhere in France as it is in America. The fast-food chain surely exists and is present in large cities, but they are not necessarily in every neighborhood like they usually are in the States. According to Statistica.org, there are only around 1,400 locations in all of France in 2018, which is approximately only 10 percent the amount in the U.S. Moreover, French McDonald’s is not the 24-hour show that is in America: they actually usually close around 1am and open around 8am.

Connotations of McDo in America vs. France

Some of these major differences between American and French attitudes towards McDonald’s come from the different connotations that the franchise has in each country. In America, McDonald’s is very much perceived as the bottom level of dining that one can go for. It is inexpensive, cheap quality, and plainly fast-food. People generally do not spend time dining-in because they do not see it really as an event, but more so something to pick up through drive-thru when they are feeling lazy and want some good old fashioned junk food. What is interesting to note, however, is the people who do usually choose to dine-in: Usually the people choosing to dine-in are lower-class families who take advantage of the affordable prices at McDonald’s to use it as an opportunity to dine together. I have also noticed that, whenever I do walk-in instead of drive-thru, there are many construction workers who will use the dine-in option to get a quick and cheap lunch, and take a break together. By contrast, almost anyone and everyone dines-in in France. People commonly choose to dine-in at McDonald’s in France, and for those who cannot seem to find an open table or empty seat at the restaurant, they will order to-go and take their McDonald’s to a nearby park where they will then sit and enjoy their meals together. Certainly McDonald’s does not lose its title as a fast-food chain, but in France, they do not seem to have quite the negative, lower connotation associated with McDonald’s in America. People are not as self-conscious to be seen eating at a McDonald’s in France, whereas some might feel awkward or embarrassed to be seen dining-in at a McDonald’s in America.

Possible explanations for the connotations

While discussing my observations with my hosts at dinner one night, my hosts explained to me that one of the reasons why McDonald’s in France seems to be a bigger deal than McDonald’s in America is the fact that it is one of the few reliable places to get a burger. She mentioned that unlike the U.S., there are not many specialized burger restaurants, so whenever people feel like eating a burger and fries, they will reach for McDonald’s. I found that to be interesting because after reflecting some and looking around, there really are not many burger restaurants or other burger franchises other than McDonald’s, that I’ve seen. In the States, aside from independent burger restaurants, there are actually many burger franchises that are of better quality than a fast-food burger, but still exist in multiple locations; just to name a few: Umami Burger, Johnny Rockets, Five Guys, etc. Another reason why there might be this difference in perception towards McDonald’s could be that the quality and presentation of the fast-food in France is just better than that of in the U.S. It is known that American McDonald’s is not the prettiest of foods, nor of great quality. It is actually not uncommon that McDonald’s workers will forget parts of your order or even ingredients in your food that they have become internet memes. 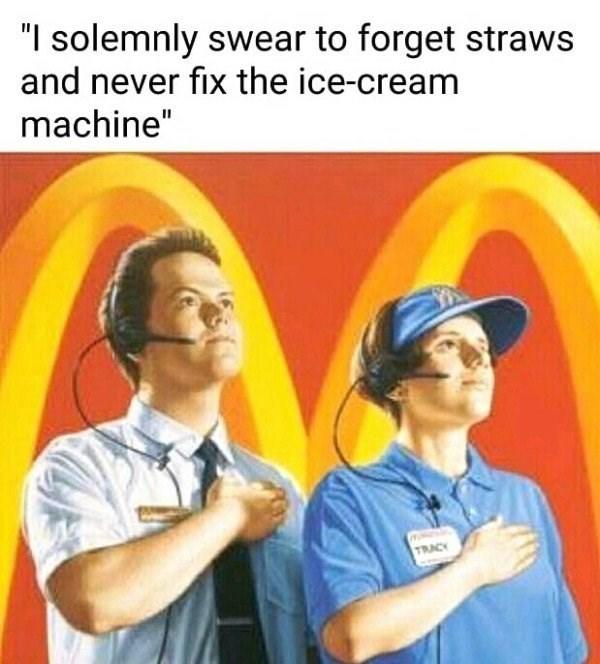 One of the most common memes about American McDonald’s revolves around the theory and fact that their ice cream machine is always broken. Therefore, really the only dessert option rests at a soggy apple McPie. Yet in France, McDonald’s features special items specific to the country such as burgers and sandwiches made with a fresh, warm baguette. You can even finish off your meal with dessert options ranging from five different flavors of macarons to mini tiramisu to the southwestern French specialty, canelé. With menu options like these, I would surely be open to French McDonald’s dining experience.