Growing up, my family made sure that animals were always apart of the family no matter what it was. I have distinct memories of every spring having little chicks in our bathtub and raising bunnies in our backyard. These pets were short lived by none other than our golden retrievers. Since I have been alive we have had four golden retrievers that have lived long, exciting lives. Each one of them has made a lasting impact on my life and childhood. It was a tradition in our family that the golden retrievers belonged to the eldest person and for the next dog; it would belong to the second eldest and so forth. Since there are 5 members in my family, every one but me had the chance to call the dog “theirs”.

As the start of senior year was quickly approaching, my family was mourning the tragic loss of our 3rd golden who suffered a long hard battle against Non-Hodgkin’s lymphoma. Since December 25th we looked hard and long for the dog that could mend our broken hearts. It wasn’t till August that we had found a local breeder just down the road from our home in our small country town. We all drove out to the farm on August 15th 2011, and there was two golden retriever puppies playing out front of the farmhouse. One had a pink color and the other had a blue color to differentiate the gender. The last two goldens we had were males and this was finally going to be the one I was able to call “mine.” I picked pink and the rest is history.

She sat on my lap the whole ride home, which later became a bad habit, as she got older. I had already picked out a name for her but it required a vote by the whole family. Unanimously the name got 100% of the vote so on the 3rd day, we named her Ellie.

The first month can be best described as a whirlwind of emotions. I never left her side and vice versa, I took her everywhere like a little kid and their blanket. This had benefits and consequences because I was able to train her all day every day but she developed bad habits that she still has today. For example, for about six months she used to sit on my lap while I was driving which raised serious eyebrows for any passing cars. Eventually, she became too big to actually sit on my lap but the habit continued that she always sat either on the front seat or on the armrest between the two seats. Now she just likes to stand on the armrest and stick her head out of the sunroof while I drive. It took about the same amount of time for her to learn where the proper place to go to the bathroom is, the difference between a toy and furniture, how to steal food from the table and that digging a hole in the carpet is not the same as digging a hole in the ground.

Although her favorite activity is something my family made sure to instill very early on in her puppy years that is swimming. The first time we took Ellie swimming, the only way she would go in the water is if I would go in first. She still wouldn’t follow me, not even for a treat. Eventually, I just picked her up and walking into the water and she swam for the first time ever right next to me. From then on, she would swim for hours on end fetching sticks, digging for rocks, chasing fish and letting he strong current carry her for 2 miles while we ran after her. 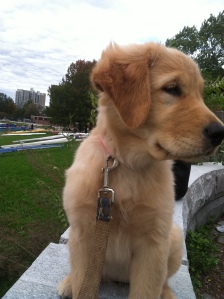 The first year of Ellie’s life was jam packed with memories that I will always treasure. From 9-hour road trips to swimming in the ocean and to being the team mascot at every field hockey and lacrosse game I had my senior year of high school. She made that last year unforgettable in more way than by just being her. She taught me a lot about responsibility and reflecting back now, I realize I was more prepared for college than some of my peers. Solely based upon that I had this huge undertaking of raising and training a puppy by myself.