Yogi is a 2-year-old cocker spaniel and a terrier mix. Yogis’ favorite thing to do is run around in the backyard and eat tortillas. When Yogi is outdoors in his backyard at home, he doesn’t raise his leg to pee but anywhere other than his backyard he does. Leg lifting in dogs is associated with dominance and marking of their territory, submissive dogs may not display this behavior. In some cases, dogs simply don’t find it comfortable and have no territorial drive (Primovic, 2015). Yogi is very protective of all members of the family which can explain this behavior. Yogi’s owner, Molly, assumes that this behavior is self-taught and that Yogi only feels the need to mark his territory when in an unfamiliar environment. Yogi is very respondent to the words outside and tortilla hence his two favorite activities are running outside and eating tortillas. A highly debated topic is whether dogs comprehend the words said to them or if they simply respond to your facial expressions, tone of voice, body language, etc. Researchers used an innovative, non-invasive method to analyze dogs’ cognitive responses to instruction words, nonsense words that have similar sounds to those known instruction words, and nonsense words that sound nothing like the known instruction words (Robert, 2021). It was found that when it came to distinguishing an instruction word from a nonsense word that did not resemble the instruction word, dogs’ brains processed both and were able to tell the two apart but when told a nonsense word that had a similar sound to an instruction word, they couldn’t distinguish at all. This type of non-detailed phonetic recognition is the same way that babies up to the age of 14 months process speech (Robert, 2021). This finding proves that dogs do understand some words but despite this most of their understandings heavily rely on our facial expressions, tone of voice, body language, etc. This study concludes that your dog does know some shortswords/phrases said to them but does emphasize that most of our interactions with dogs are based on other non-verbal cues. 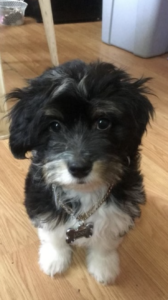