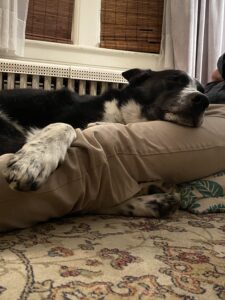 Blue is a very active dog, he spends the majority of his time on walks around the neighborhood, going on hikes in the woods, running, playing catch or frisbee, or tugging his toys. Without this near-constant attention and physical activity, Blue becomes very bored and tends to act up. His naughty behaviors usually consist of pawing, barking, excessive pacing, and disobedience. Thankfully, my family knew this about border collies before bringing him home, but it is a lot to keep up with! For Blue, it is obvious to see that his level of boredom, or non-activeness, directly impacts his behavior.

One specific study, which included a total of 53 border collies among the large group of varying breeds, was researching this very correlation, trying to figure out if behavior is influenced by the level of activity the dogs get. The study stated: “Physical activity, especially if carried out through sports, requires that the animal develops a remarkable ability to cope with frustration and to maintain the self-control” (Zilocchi et al., 2016). 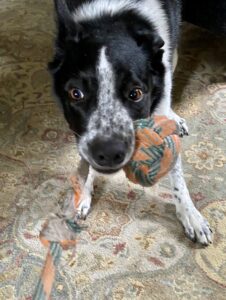 Very similar to humans, exercise and brain stimulation, more than likely will help the person have better coping mechanisms and be able to work through conflicts or issues in a clearer manner. The research from this study revealed that more often than not, sedentary dogs are more likely to express behaviors such as: Urinating indoors, mounting, disobeying commands, destroying household items, barking at other dogs, showing aggression, being defensive about territory, etc. (Zilocchi et al., 2016).

The results show the potential positive effect that physical activity has on dog behavior and that dogs that are getting adequate physical activity are much less likely to exhibit the “bad” behaviors that were surveyed! 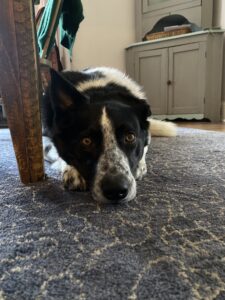 Another very interesting point that the article made about the border collies in the study was that “…the behavior of chasing vehicles/ bicycles and persons is part of the special ethogram of the Border collie that, chasing the sheep must lead … this behavior has been not showed by dogs performing agility because this sport discipline requires an elevated level of training which allows controlling undesirable or even dangerous behavior such as chasing vehicles or people” (Zilocchi et al., 2016).

Blue is a prime example of dog behavior being influenced by activity; he needs multiple walks a day and lots of space to run in order to be satisfied! It is important to know this information when considering specific breeds of dogs, blaming the dog for bad behavior is unfair when they could simply need more activity!