Hello hello hello, is there anybody listening out there? I wasn’t sure.

Anyway, the weather here in Carlisle has taken yet another drastic turn for the cold and depressing, with some apocalyptic rain for good measure. For those of you suddenly depressed by copious amounts of last minute papers to write plus the lack of sunshine, here’s a breaded cat to cheer you up: Anyway, here are some of the adds for this week:

Anathema — Weather Systems: This band is pretty doom and gloom, but not so much so that you need to curl up in to a ball afterward. A little more 90s alternative than I usually go for, at least in public, they definitely work as a pleasant mind meld when you’re tired of pretending that OFWGKTA is the only thing you ever listen to outside of working out at the gym. RIYD: 30 Seconds to Mars (lol), Porcupine Tree, Muse

Joel Plaskett Emergency — Scrappy Happiness: Who doesn’t like a guy with a dreamy voice singing about nostalgia and stuff? I would describe this album’s genre as being a creature of “wistful rock music.” Let’s get weepy. RIYD: Paul Baribeau, Ted Leo, Elvis Costello

The Guiltracket — Thuds and Grunts: Still not sure if that’s all supposed to be one word or two words. Oh well. This band is probably my favorite add for the week, just saying. They’re a lot punkier than we usually have in our binder, and they balance it out by having plenty of folk edge to them as well. RIYD: This Bike is a Pipe Bomb, Ghost Mice

Anyway, keep your nose wet and your tail dry. Er…

Apparently Carlisle weather decided to switch from almost freezing to SWELTERING summer weather overnight. I’m as shocked as the rest of you. Truly.

A little heat can’t stop ME from giving YOU the latest updates to the station’s heavy rotation binder this week though. In fact, I like the excuse to hide from the sun. No vampire jokes allowed. Anyway, here are the ADDs for this week:

Live Animals — Live Animals: This band is a rag tag group from SoCal and they fair from a skate punk surf snob scene indeed. RIYD: Sublime, 311, people in animal masks.

Toro Y Moi — June 2009: A revival of some of Toro Y Moi’s older and unreleased tracks, reminding us all why we luv him so much in the first place. RIYD: Best Coast, Ariel Pink’s Haunted Graffiti, Flaming Lips

Part Time — What Would You Say?: Synthetic pop is making a come back…who knew it ever left? RIYD: M83, Ariel Pink’s Haunted Graffiti

Anyway, anyone else remember Sailor Moon? So magical.

Have a great rest of the week, try not to break anything, and eat lots of pizza.

Sorry about the lateness, I’ve been distracted by derpy cats for most of the week. As well as school assignments and a nasty cold. Excuses, excuses. Anyway, my ADDs for the week are as such:

Vivian Darkbloom — Know Your Exit: Folk rock is always great, especially with a dark edge. This band kind of sounds like if The Decemberists got lost in the woods on a really bad day, with Straylight Run writing the lyrics. RIYD: The Kooks

Mark Alexander — Closer: Apparently “Midwest Rock” is a genre now. And this band is the epitome of that, cowboys and blue jeans and angst for the win. RIYD: Ray La Montagne

Jonny October — The Wheelhouse: Would you look at that, I reviewed a hip-hop artist. This guy is unassuming to look at, but he has some great lyrics and a general knack of hip-hop. RIYD: Kid Cudi, Flobots

Well, that’s all I got for this week. Tune in next week for more weird pictures and/or memes. Yeehaw! If you didn’t know by now you will soon. WDCV is having an awesome benefit concert this Saturday April 14th. There are going to be raffle drawings if you bought tickets at any of the live on Britton Plaza events. Secondly there is also another nice prize for anyone who said they were going to attend on Facebook and attends the event, so kudos to another potential winner. The event starts at 7:00 p.m. and the following bands will be playing: Charlotte, Synergy and Wild Horse. Run With It will also be making an appearance so be sure to check them out too. There will be plenty to snack on and lots of loud music so be sure to stop by. In reality, the more the merrier.

Most importantly, by attending the event you will be supporting an honorable cause. Money raised at the even will be used to help build a well in Tanzania. The township does not have the resources to collect clean water and this could give them a big hand.

Hope you are all having a wonderful start to April so far, and that you didn’t experience too many traumatic experiences on April 1st. Honestly, the only reason I knew that Sunday was April 1st was because of the premiere of the new Game of Thrones season. Yeah, I said it… Anyway, here are the ADDs for this week

Emily Wells — Mama: She may or may not be one of the sisters in Coco Rosie, or perhaps a long lost relative. Her voice is devastatingly beautiful and her music is just as haunting. RIYD: Coco Rosie, St. Vincent, (Old) Nelly Furtado 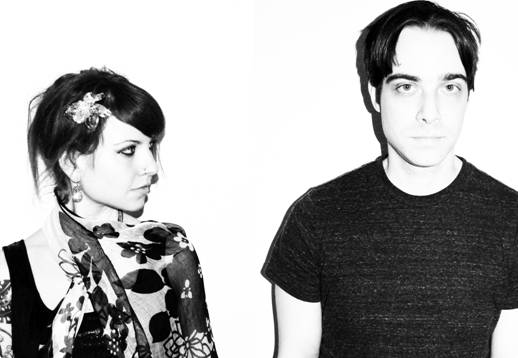 Music directors of the past used to blog about the weekly heavy rotation updates, what was good and what  was favored, etc. Well, I’ve decided to pick up the mantle once more and try to keep this blog more updated on the heavy rotation front. We’ll see how it goes.

So far of this weeks ADDS, this artist has really caught my attention:

The second full-length studio album from the electronic power-pop duo, this album is full of brain blasting synthetic beats and lyrics about suicide and possible illusions to war. Or something. While the lyrics are cheesy at worst, and love sick at best, the album as a whole is a pleasurable and yet fun listen. Recommended if you like Beach House, Cults and M.I.A. Best tracks of the album are, arguably, “Born to Lose” and “End of the Line.” This album also could have totally been part of the Drive soundtrack. If you haven’t seen that movie: GET ON IT.

Feminsit Ryan Gosling is Feminist and also like Sleigh Bells

“Treats” was a great album, but this album is deeper and darker, and by deeper I mean the attempt at depth is a little more obvious.

Sometimes you don’t have to drive all of the way to Baltimore, Philly or NYC to see a good show.  Some are happening rather close by.  Check out these upcoming shows at local venues.

For Chris and Oliver Wood, music has always been a family affair. Raised in Boulder, Colorado by a Harvard-trained microbiologist [more]

Quagmire Swim Team is an unusually generic jamband with common skills and an incredibly lame audience. The band’s songs are [more]

2011 has been a seminal year for Conspirator. Formed in 2004 by Aron Magner and Marc Brownstein (The Disco Biscuits’ [more]

Plus guest MC Supernatural and more TBA Tickets on sale March 4 at 8AM Corey Woods aka Raekwon The Chef, [more] Tickets

Colin Hay may be best known as the lead singer for Men At Work, the platinum selling Australian band that [more]

Kurt Vile and the Violators

The Dick Dale Phenomenon. His style is something different and unique. Since his first appearances Balboa, Ca. at the famed [more]