Over the course of this semester, I have been researching the idea of the Islamic State having the capability to become a sovereign state in the international community.  Before you laugh at this post and claim that I am a psychopath, I want you to stop and consider the facts.

When you look at this question, try to eliminate the vision you have of ISIS, which is,”ISIS is a bunch of murderous savages” vision.  Yes, I feel the same way, but something many fail to realize is that the Islamic State is actually starting to form into an Islamic State. 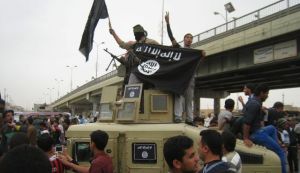 They have an education program, a source of revenue, a legal system, a governing system, and so on.  The cities that have been captured by ISIS have been turned into provinces.  Within these provinces, there are millions of people who have decided to convert to the ISIS version of Islam (which is required) or have even fled from their actual homes to live in the provinces.  Based off my research, residents who live in Iraq and Syria actually believe the Islamic State presents a more stable government than their own.

Via Institute for the Study of War

In order to be considered a sovereign state in the international community, the state has to be recognized by other international actors.  ISIS, in this case, most likely will never receive that benefit.  With that said,  I will leave you with a question and the question I answered throughout my paper.  Can the Islamic State successfully function without being recognized by the international community?  My answer was a yes they can, even though it would be a long drawn out process. I will not go into my answer in depth because I will end up writing another 15 page paper, but I am curious to see how others feel on the matter.  Please comment below if you feel the need to attack my claim.

Via Institute for the Study of War

****This is a report of how ISIS governs their provinces in Syria that helped me out.****