As someone who grew up and was raised in Connecticut, when I went to away to school there were certain terms I had never heard before. Even students from the Tri-state area used different terms. For example, I had always considered a sandwich a “sub” whereas my friend from New Jersey called it a “hoggie”. Over the years it was interesting to see how different words varied, even in near proximities. Speaking about differences between states, I recently I read an article about SwiftKey, the maker of the keyboard apps. Swiftkey conducted a study that analyzed the most popular emojis in each state. I had no idea what Connecticut’s would be however, I was surprised. Want to take a guess? Scroll down below to see the answer!

The koala! The most popular emojis in Hawaii included the surfer, rainbow, waves, pineapples and the volcano, all of which make sense. Why is Connecticut the koala?? Don’t get me wrong, I think koala’s are adorable, but since when is Connecticut that similar to Australia?!? I will be thinking about this over the next few days. Feel free to comment with thoughts/opinions! 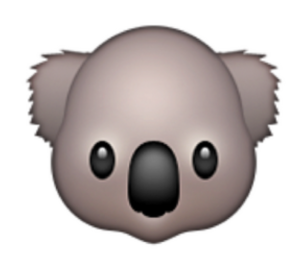 Check out the full report here