Certain breeds of dogs that were bred for certain traits and behaviors have developed unintended behavioral disorders. For example, both Dobermann Pinscher and Dalmatian were bred to be loyal watchdogs and to have speed and endurance, often develop obsessive-compulsive disorder and aggression.

Animals have domesticated and evolved to tolerate human presence which has predisposed them to additional genetic and environmental triggers. An example of this is the breeding of “pure” bloodlines which sometimes leads to inbreeding. Similar to human inbreeding, it can result in painful and life-threatening disabilities in “purebred” dogs.

Two-year-old Gordie, who was in various violent foster homes for the majority of his first year alive, has acute trauma which has developed into separation anxiety when left away from his owner. Gordie can be destructive if left alone and sometimes urinates when anxious. Jasmine, Gordie’s owner, is very comforting and loving towards Gordie which eases him when she is going out. Gordie’s bestie, Millie, a Maltese and poodle mix also alleviates some of his anxiety by distracting him, whether that be playing tag, hide and seek, who chews the most socks, or nap time together. Dogs with behavioral disorders such as Gordie must be further understood because the more knowledge available to dog owners the better cared for a dog will be.

It is imperative that further research is done to understand dogs with behavioral disorders, like Gordie, to provide knowledge to the general public and most importantly dog owners. Although “separation anxiety” can highlight a problem, dog owners must stray away from using such terms to give a diagnosis. The significance of understanding the emotions: of fear, frustration, and panic associated with the loss of an attachment figure is essential when studying the causes and effects of separation anxiety. 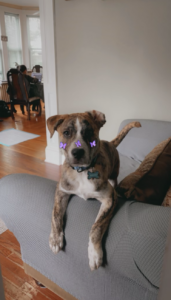