For thousands of years, humans have considered dogs their best friends. With so many different dog breeds, it is nearly impossible to choose one for your family pet. When humans are searching for their perfect dog, they typically decide between many factors. One of the most important things a potential dog owner can look for is loyalty in a dog. There are many aspects when trying to decide if a dog is loyal to its owner, two of which are the act of dogs following their owner around and responding appropriately to different cues.

After figuring out that dogs and humans have such special connections, scientists have begun to research the specific reasons for these bonds. The authors of the paper “An empirical examination of the conceptualization of companion animals” look into the science behind the connection between humans and dogs. According to the passage, researchers have found that dogs typically promote the well-being of humans through their emotional support, sense of security, and companionship. In one section of the article, the writers mentioned that loyalty was among the five most prominent attributes of dogs. This research allows humans to understand why dogs are loyal and how human-animal interaction works in different households. 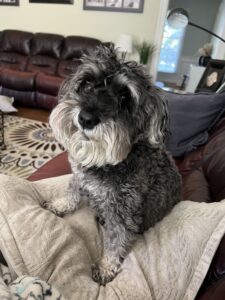 Bailey has been with my family for many years and has provided loyalty from the first few months we adopted her. Although some of this loyalty may be due to her genetics, Bailey also proves to be a loyal dog from the way she has adapted to my family. She almost always listens to us and has much empathy, making her the perfect companion. Bailey, along with many dogs around the world, is loyal and makes a great addition to any household. Dogs have such strong bonds with humans, making it easy for them to be loyal to their owners and provide comfort when indicated. Loyalty is one of the greatest traits in dogs, and similar to countless other dogs, Bailey demonstrates this trait well.

Littlejohn, A. (2022, January 5). Are Schnauzers Loyal To Their Owners? 9 Facts Revealed. Pawscessories. https://pawscessories.com/schnauzers-loyal/