It is very hard for people to understand that Henry is only a puppy, because he is absolutely massive. As a Goldendoodle, he was not predicted to be this large, but he has defied all odds, and stands as a whopping 80 pounds in eight months. Although it is hard to comprehend his size, scientists have been asking the same question about all breeds for a while. Multiple tests have been run in order to solve the mystery of variation between sizes of dogs. The most successful test involves taking Portuguese Water dogs, which are extremely unpredictable in size. 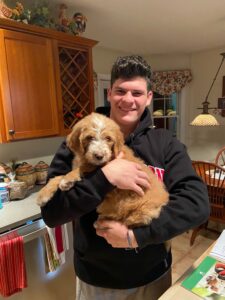 The experiment started by using an old experiment where 92 dogs were radiographed for skeletal measurements, and it was concluded that two sections of the DNA strand (FH2017 and FH2295) were responsible for the growth of the dog. In their experiment they discovered “302 single-nucleotide polymorphisms (SNPs) and 34 insertion/deletion polymorphisms” (Sutter et al, 2007) by sequencing 338 polymerase chain reactions in four small dogs and four large dogs. When observing and measuring the effects of the reaction inside the dogs, they noticed a peak within the growth hormone 1 gene (IGF1), confirming that the previous experiment is true in holding the FH2295 DNA strand responsible. This is interesting because another correlation to humans is formed, for the IGF1 gene is responsible for growth in humans as well. In both mammals the “IGF1 binds the type 1 IGF receptor” (Sutter et al, 2007) promotes cell growth and life longevity.

In Henry’s case, he had grown well beyond what he could handle. For the past couple months, he was falling over himself, extremely clumsy and just a wrecking ball. His bones grew too big for how playful and crazy he is, but after getting trained he has come into his large shape and settled down and can walk/run without falling. He is the largest to come out of his liter and it was not foreseen that he would have ever been this big because his mom and dad are both on the smaller side. His mom, a Golden Retriever, was approximately 40 pounds and his dad, a Goldendoodle, was about 50 pounds. It will be interesting to see how big he continues to grow because I do not think he is stopping any time soon! 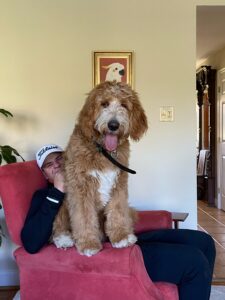