In this experiment, they used four Labrador Retrievers and five Standard Poodles. The experiment was conducted within a university, therefore all the dogs owners included staff and students in the University. All the tested dogs had experienced basic obedience training and were naïve to the task at hand. At the beginning of the experiment the dogs underwent a training phase. In this phase, a set of photos was shown to the dogs, “a set of face (positive stimulus: S+) and back-of-the-head photographs (negative stimulus: S−) of one particular male person, who was a university student and usually had some contact with each dog 2–5 days per week in the university, was presented to all subjects” (Nagasawa et al, 2011). They then had a second training phase where a set of photos of the owner was shown to the dogs. These photos were of the dogs’ owners smiling and one photo of the owner with a blank face. After the first training phase, over five of the nine dogs met learning criteria and the others “showed an extremely strong lateral bias when selecting stimuli” (Nagasawa et al, 2011). When the second training phase was over, all the five dogs made the training criteria.

The dogs were then tested within three different sessions. In the first session, 10 sets of the smiling face (S+) and blank face (S−) photographs of each owner were presented (OW session)” (Nagasawa et al, 2011). All photos that were used were new to the dogs and for each different photo, the owners put on glasses, hats, changed clothing, etc. In the second session “the same smiling faces of the owner were presented simultaneously (SS session)” and then in the third session, “the same blank faces of the owner were presented (BB session)” and “photographs of the owner’s angry (S+) and blank (S−) face was presented” (Nagasawa et al, 2011). Results showed that in both the first phase and second phase of testing, the correct responses were much higher than the chance level of the binomial test. The results of the third testing phase showed that where was not much of a difference between the correct response rate and the chance level. 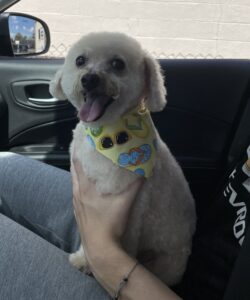 From what me and my family have noticed, Charlie is always able to notice our emotions and different facial expression. There have been several times where we have noticed that when we are smiling and happy, Charlie reciprocated being happy and will have more energy. Another example of Charlie detecting our emotions is that when we are sad/crying, he does not leave our side, and just sits next to us. Right before I left for college, I was crying and saying bye to Charlie, and he was licking my tears and stayed in my arms for the duration of me being home. Also, when our family gets extremely excited and we are laughing/smiling Charlie will have more energy, run around the house, and bark at us. It was interesting to read about how the dogs could tell the difference in emotion and see how I can relate this to Charlie because now I can see how Charlie senses our emotions. 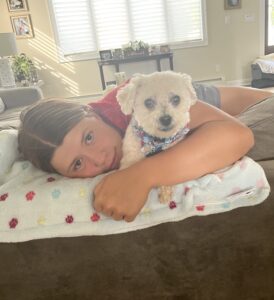