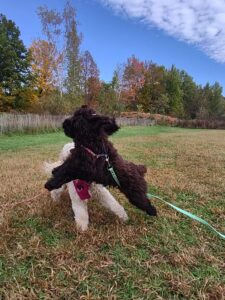 Teddy is currently going to puppy training every week. It is one of the most important and common things for owners of new puppies to do is to take them to a training camp. At these camps the puppies can socialize with other puppies. Puppies need to learn how to interact with other dogs since they are very impressionable at their age and what they learn will stay with them for their whole lives. In addition to socializing, the puppies are trained to obey commands such as sit, stay, or lay down. These basic commands will help the owner have some control over their dog, which will make it easier to perform daily tasks with them. For example, Teddy doesn’t cooperate when we try to put the leash on him for a walk. He doesn’t stop squirming around. It takes longer than it should to get it on him. Once he learns how to listen to and follow instructions it will require much less effort to put his leash on him. In a study done at Azabu University Graduate School of Veterinary Science in Japan, puppies and dogs were split into four different classes and trained for one hour a week for six weeks. The classes were the puppy class, the puppy party, the adult class, and one group did not take a class. The puppy class was a group of four to eight puppies, the puppy party was a group of four to eight puppies and their owners, and the adult class had between two and five dogs. The main difference between the puppy class and the puppy party was that the owners in the puppy class were given exercises to continue their puppy’s training at home. After the six weeks of training, each class had made a great difference in the puppies and dogs’ obedience. The major difference was seen in the test of socialization with strangers. The puppies who were in the puppy class had the most positive reactions towards strangers. Therefore, it was concluded that the puppy class was the most effective in preventing behavioral and social issues in the future.

Trainers use different techniques when training puppies. One method is using a shock collar. Many people frown upon this now because it is seen as negative reinforcement, whereas it is believed that positive reinforcement is more effective. In addition to this, it is thought to scare the dog and make them more timid since they don’t want to be shocked. From a survey done in England about what methodsowners used to train their dogs and how well it worked, it was determined that only 3.3 percent of owners used some form of an electronic device. The other owners mostly used methods of rewarding their dogs with treats or attention. This is an example of positive reinforcement. Many owners who did this reported more success than owners that used negative reinforcement and shock collars. The trainer Teddy is going to see is big on positive reinforcement and does not use shock collars. He is a cocker spaniel and poodle mix, so he is a smaller dog. My old dog was named Maxwell, and he was a chocolate lab. He had an electric fence, but if he really wanted to leave the yard he would run right through it. This makes me think about how he would’ve acted if he wasn’t trained with the electric fence. I wonder if electric collars are more effective with different breeds of dogs, or if in order to train some breeds the best way is to use one. These are things I would like to research in the future.