A First Look At Role Playing Games: I Discover Role-Playing Is More Than Just Dungeons And Dragons 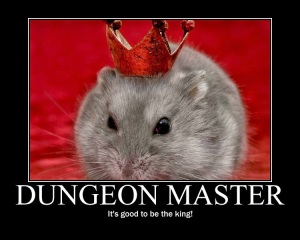 Over the last few weekends, I’ve tried playing pen and paper role-playing games. To some people, that’s doing a lot of work to pretend you’re fighting dragons in the world of Dungeons & Dragons. But Dungeons and Dragons are only the tip of the iceberg in role-playing games. Games are not limited to what’s being sold on Amazon.com, games can be anything your mind can imagine. For example I played two games invented by my friends McClain and John. McClain’s game was a survival-horror genre game that had short and simple limitations. John’s  is a fantasy mash-up “4th wall” game that is long and comes with a limitless number of customization options. Each was a completely unique experience with pros and cons which I’ll go into detail about individually in my next post.

First, I’ll give you guys some role-playing vernacular:

DM: The Dungeon Master. Also can refer to GM, or Game Master. This is a person who is not a player in the game, but the person running the game. They write and manage the story as well as operate non-player characters and other elements of the game. In my case, this was McClain and John respectively.

Character: The avatar representing the player in the game. As I’ve discovered, this avatar can be as simple or complex as the game requires.

Campaign: A series of sessions that make up an iteration of a long adventure game. Long games like John’s are long campaigns requiring a number of meetings to complete, while McClain’s “one-shot” campaign is meant for a single session.

Class: What a character is good at, their adventuring profession (fighting, thieving, using magic, etc;).

D20: A Twenty-Sided Die. While other kinds of dice are used in role-playing, the twenty-sided die is a genre standard. Actions in Role Playing Games are sometimes “rolled” for, which determines how successful they are.

Critical hit: A role of 20. Usually means the action kicked-ass and did more than a good job.

Critical miss: A role of 0. Usually means the action failed terribly and the player should expect consequences for it.

Stats: statistic number aptitudes of a character, kind of like how good a character is at something on a scale of one to ten. Stats are divided into various fields such as strength, Magic, Endurance, and Charisma. Not all games require stats, but many games add them in order to allow players to specialize their characters and work together as a team with different strengths and weaknesses.