Better late than never, here are a few pictures from this summer’s Dickinson Latin Workshop (aka Latin Camp), in which our merry band read Prudentius’ Psychomachia with Prof. Marc Mastrangelo. Thanks to everyone who made this such an enjoyable experience! 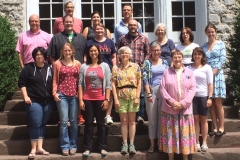 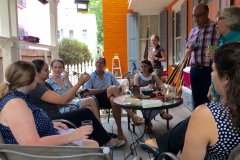 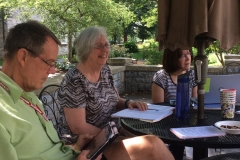 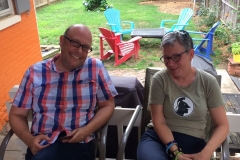 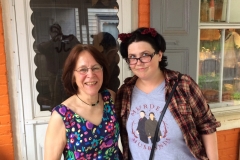 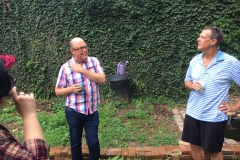 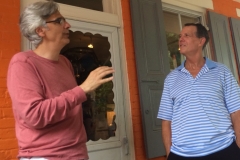 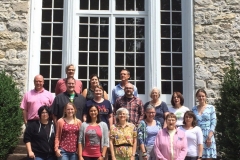 A story in Maffeius’ Indic Histories Book 5 concerns a fighter named Noadabegua from Malacca who fought the Portuguese bravely and died, pierced with dozens of wounds, but the wounds did not bleed until an arm band was removed that contained the bone of a certain local animal. When the arm band was removed all his blood flowed out at once, as if a vase had been shattered. mirum dictu! comments Maffeius. The mystery here is the identity of the animal: os animalis cuiusdam Sionii (cabim incolae appellant). In the book from which this comes both Sionii and Cabim are capitalized. Neither word appears in any Latin dictionary I have access to, nor is there anything of use in the very large LLT-A and LLT-B databases of later Latin published by Brepols, and which I have access to at work. Here is the whole passage.

Presumably Sionius is an adjective referring to a nearby place or people; I’m thinking the nominative form of the animal in Latin would be cabis. But what is this magical critter whose bone can stop the flow of blood? Creating a Digital Commentary for Teaching

Do you write your own notes on Latin texts for your students? Are you frustrated with the limitations of Microsoft Word when it comes to parallel display of text, notes, and vocabulary? Now you can create attractive, usable reading texts online with vocabulary lists and notes simultaneously displayed, and the ability to include hyperlinks and add audio-visual material. This workshop will demonstrate and provide practice with a new plugin for the WordPress CMS that mimics the easy-to-read format of Dickinson College Commentaries. In addition, participants will see demonstrations of and practice using a variety of online tools that are helpful in the creation and annotation of reading texts: The Bridge for vocabulary list creation; DCC core vocabulary; Pleiades for geography; digitized grammars and reference works for simplifying annotations; Johan Winge’s macronizer; and others.

This workshop will be of interest primarily to Latin teachers, but others are more than welcome to attend. The workshop is free of charge, but to order materials and food we need to have an accurate count of attendees. For pre-registration please contact Terri Blumenthal: blumentt@dickinson.edu, by October 9, 2017.

Bret Mulligan is Associate Professor of Classics at Haverford College. He is a specialist in Late Antique Latin Literature, and a leading digital classicist. He is project director of The Bridge, the author of Life of Hannibal, Cornelius Nepos (Open Books Publishers and DCC), and a contributor to The Living Past: Recasting the Ancients in Late Latin Poetry (forthcoming, Winter Verlag).

Chris Francese is Asbury J. Clarke Professor of Classical Studies at Dickinson College. He specializes in Latin literature, and is project director of Dickinson College Commentaries. He is the author of Ancient Rome in So Many Words (Hippocrene 2007), and Ancient Rome: An Anthology of Sources (Hackett, 2014).