There’s a superabundance of data out there and growing demand for those who can mine it effectively. On May 6, 16 students showed them how it’s done during the GIS (geographic information system) Exhibition and Poster Session, an annual event showcasing the ways students apply powerful technology to recent or ongoing research.

“It’s a reasonably complicated computer program to learn, but it’s definitely worth the learning curve,” said Jill Hautaniemi ’14 of the software, which provides a framework to store and analyze geographically based data.

MAPPING NEAR AND FAR

The students, all part of an advanced GIS-applications course, presented data that had been recently gathered in points near and far. A double major in environmental science and biology, Hautaniemi cross-referenced data she’d collected for her senior biology-research project with elevation data sets from a government Web site, and found correlations between elevation levels and the health of hemlock trees in the Carlisle region.

Jenna LaRiviere ’14, an archaeology major, married historical and construction data about barns in Pennsylvania with the geological makeup of the ground on which each barn stood. “By integrating location with foundational materials, we can get insights about the economic, political and practical reasons why they chose these materials, and this tells us something about the people who lived there,” says LaRiviere, who will pursue a master’s in museum studies at the University of East Anglia in the fall. “It adds a whole new dimension to our understanding of their histories.”

Environmental science major Jack Bryan ’14 examined stream-remediation options in nearby Michaux State Forest, using raw data collected by the Pennsylvania Department of Conservation and Natural Resources and by students in a conservation seminar. By creating elevation and relief profiles of the watersheds, he was able to identify the areas most in need of cleanup, and he’ll make the project available to stream-monitoring volunteers. 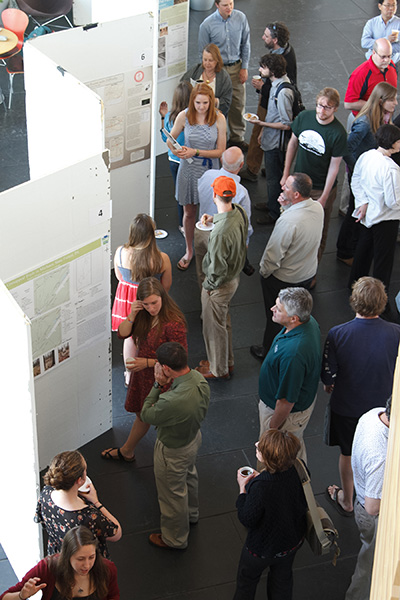 “Hopefully, they’ll build on this, and as they do, they’ll be able to recognize patterns and use different variables in tandem, combining data they might not think to combine,” Bryan said.

Taylor Thompson ’14 presented student-faculty research on the effects of temperature on sex determination in painted turtles born in 2010 at a local pond. She inputted temperatures recorded at 16 turtle sites with the precise locations of each nest, the makeup of the soil on which they rested and the sex of the turtles born there. Nests built on natural soil, which stabilizes slight temperature fluctuations, yielded a roughly even number of male and female turtles, whereas nests built on a soil-gravel mix did not. “Because the information is displayed spatially, you can see the patterns emerging,” she said.

Projects rooted farther from home included a crime-rate analysis of North Philadelphia (Amanda Vandenburg ’14), a basin analysis of a state park in Maine (Elizabeth de la Reguera ’14) and a trail map of Michaux State Forest (Tucker Deady ’14), while Will Kochtitzky ’16 and Leslie Milliman ’14 went global, creating a map of lake vegetation in Bolivia and of weathering on an island in Guadeloupe, respectively.

“It’s amazing how many different applications there are, as you can see in the variety of subjects represented here,” said Thompson, an environmental studies major who plans to apply GIS technology to her analysis of trail connectivity as part of her job with the Doylestown Heritage Conservancy, which begins after her graduation in May.

“And we’re just scratching the surface,” added Bryan. “It’s essential to know how to apply basic skills in new contexts. And this is an incredibly useful and powerful tool.”

Plotagon, launched in August 2013 by a Swedish start up and still in its beta version, cuts the effort needed to create animation by directly recreating a script into an animated film. The films can then be posted on Plotagon’s website, or on Youtube. Jennifer Musial, Visiting Assistant Professor of Women’s and Gender Studies, is putting the form to productive academic use by having her students make videos with solidly researched information. Students in the Transnational Feminisms class make videos based on their major research project.  Using Plotagon, each student creates a script featuring one character, an expert in the field, who must communicate research findings to a less knowledgeable character.  Students enjoy this creative way to convey their learning in the course. Leigh Ratino, a graduating senior in Environmental Science, created this one, a conversation about environmental racism.