To wrap up our little Vienna unit, we’d like to share this clip with you which sums up our favorite highlights during our lovely Vienna 2022 trip!

Baba Wien, see you next year! 🙂 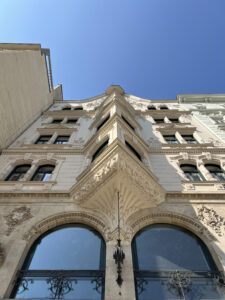 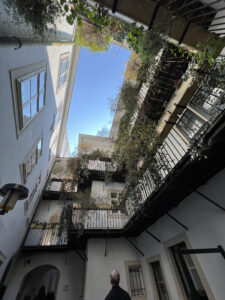 “I really enjoyed the architecture throughout Vienna. The Nationalbibliothek, Stephansdom, and Schönbrunn Palace were absolutely stunning, but what I loved most was wandering through the small streets and stumbling upon beautiful churches and colorful facades of beautifully constructed buildings.” (Amanda Sorensen) 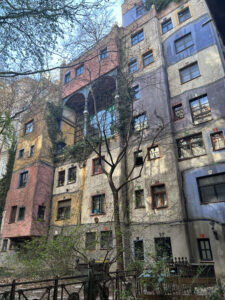 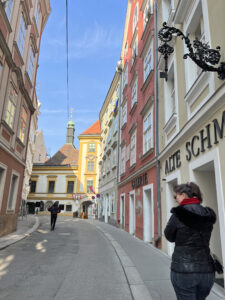 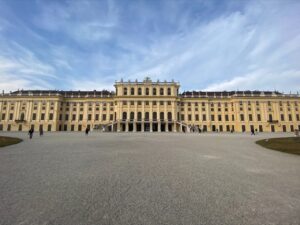 “Vienna was awesome. I have always heard and learned about how beautiful Vienna is, in class, movies, and books, but I they really don’t do it justice. Vienna took my breath away. It had a rich history with the Habsburgs and have a beautiful skyline and architecture. I really enjoyed trying traditional Wiener Schnitzel. What I enjoyed most of all, which came as a shocker to me, was the opera. The show was called 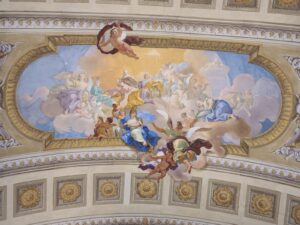 “Die Entführung aus dem Serail.” Despite our not-so-great seats, I thought the opera was electric. Vienna really was an awesome excursion!” (Mac Tambussi) 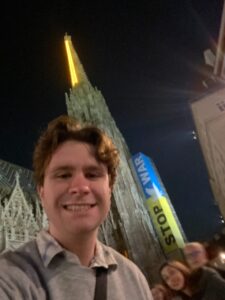 To all Uni Bremen students: Our new scholarship flyer for the spring semester 2023 has arrived! On the flyer you can find all necessary information about our scholarship program between the University of Bremen and Dickinson College.

We are looking forward to your application! 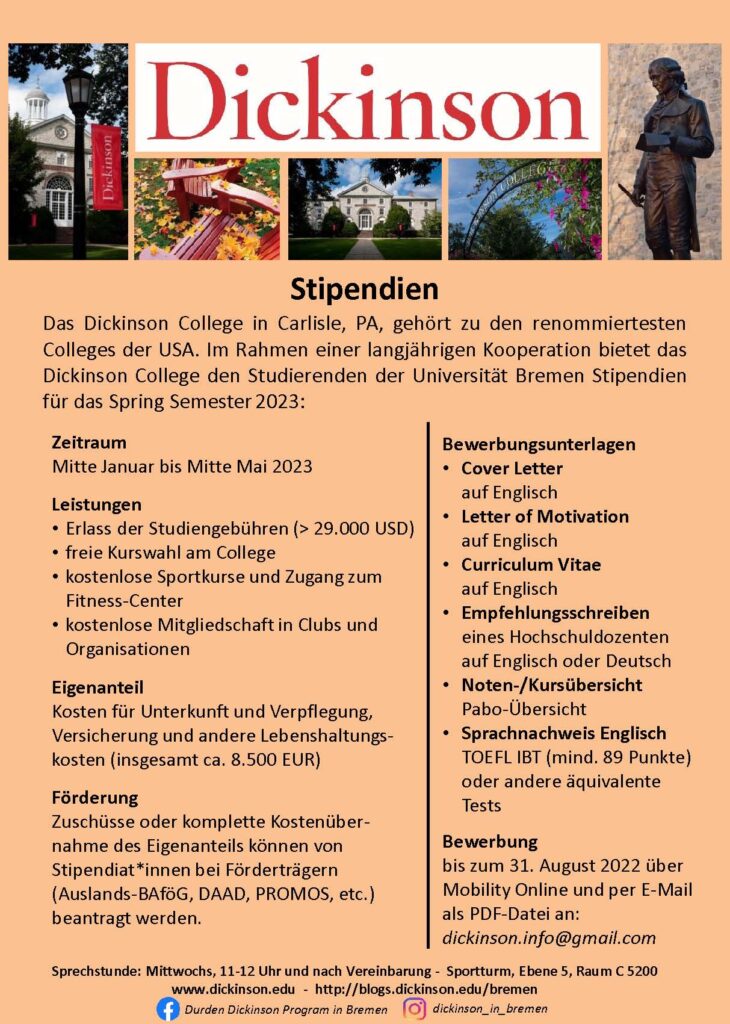 by Kathryn Baker ’23 and Nicholas Rickert ’23 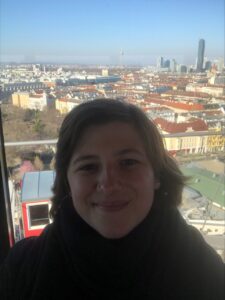 “My favorite part of our Wien excursion was exploring Prater Park! It is a large amusement park that is open 24 hours. One of the most famous landmarks in Wien is the Wiener Riesenrad (ferris wheel). We rode the Riesenrad and saw some of the most beautiful views of the city. After riding the Riesenrad, some of us walked around the park and got some food. I ate another Schokoapfel (apple covered in chocolate) and ice cream. I was surprised at how many ‘scary, haunted’ rides there were at Prater, there were at least five! Overall this is one of my favorite memories.” (Kathryn Baker) 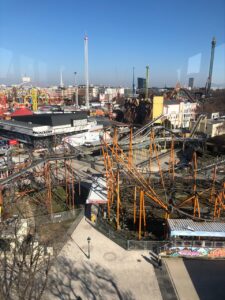 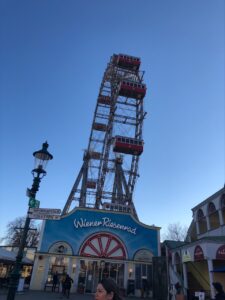 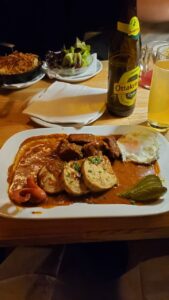 “Trying regional dishes and the enjoying unique local atmospheres in restaurants always leave me with positive and lasting impressions of a foreign city, and Vienna was no exception. Our group had the pleasure of being taken to dine in excellent traditional restaurants as well as Vienna’s famous ‘Cafe Demel,’ where I fell in love with a sweet dish called ‘Kaiserschmarrn’ which is like a pancake but much more delectable. Other highlights for me were the Viennese potato salad, Goulash, and of course Wiener Schnitzel. Combined with the lovely decor and a fine selection of beer, I don’t think I’ll be able to forget the restaurants!” (Nick Rickert) 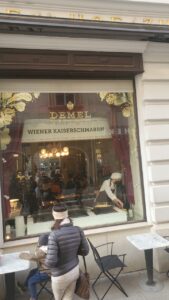 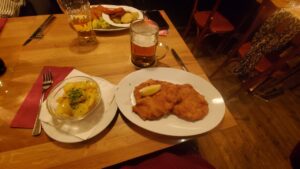 “The National Library was my favorite place we visited. The architecture and the amount of books felt straight out of a movie, and fit my dream image of the perfect library (complete with bookcase doors!) It was also interesting to learn that it was one of the first German language public libraries.” (Shannon) 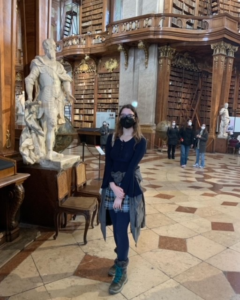 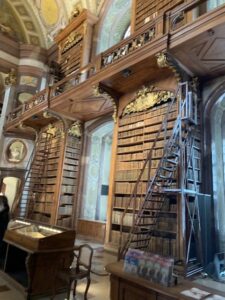 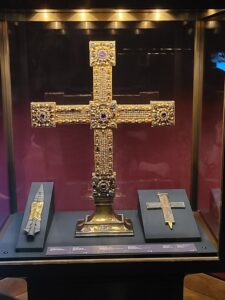 “On the first day of the excursion in Vienna, the group visited the Schatzkammer (Treasure Chamber) of Austria. Within the chamber lay centuries’ worth of priceless artifacts from various points of Austrian history. Some of the items included were coronation robes, tapestries, ceremonial swords with their sheaths, reliquaries of various saints and of religious items, and of course the crowns of various Holy Roman Emperors. Unfortunately, the Imperial Crown, believed to have been made for Otto I. (the Great) around 960 and later painted into a picture of the earlier Charlemagne (Karl der Große) who was crowned in 800, was off display for research purposes. Regardless, the treasures of Austria were an astounding journey through a millennium of history.” (Andrew) 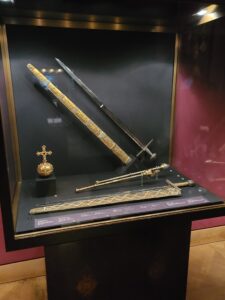 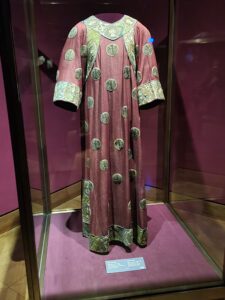 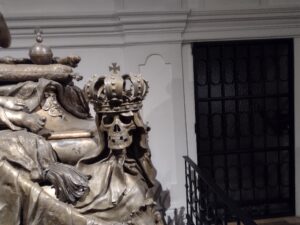 crypt of the Habsburg family). It was certainly odd to walk amongst the sarcophagi of ancient rulers but the sheer opulence and uniqueness of each coffin struck me. I think of all the decorations on the coffins, the skulls and figures were my favorite. They were wonderfully macabre, sometimes with wings or the cast crowns of their long since fallen domains. I was also quite interested in the fact that the family separated 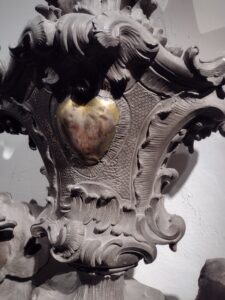 their organs to send to their family or original kingdom like the heart container in the picture here. The biggest coffin was for 2 rulers and was so large it had it’s own room and had to be lowered from the street above and the roof built above it. There are even modern burials here with one even from 2011 I believe. Certainly a lovely visit for those who love skulls and grim things. I heartily recommend.” (Evan) 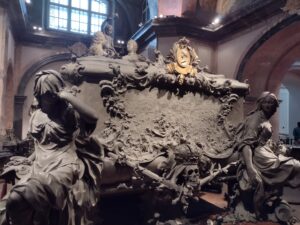 All pictures taken and provided by students or Dickinson staff.