“I thought the program was phenomenal. German culture is full of some of the most friendly and innovative minds that I’ve ever come into contact with. From the heightened level of sophistication seen in the Mercedes Benz factory to the attention to detail in the art of brewing beer- I learned so much about business abroad here and I’m super grateful for all of the experiences I had the pleasure of enjoying while abroad!”
(Kayden Tucker ’22) 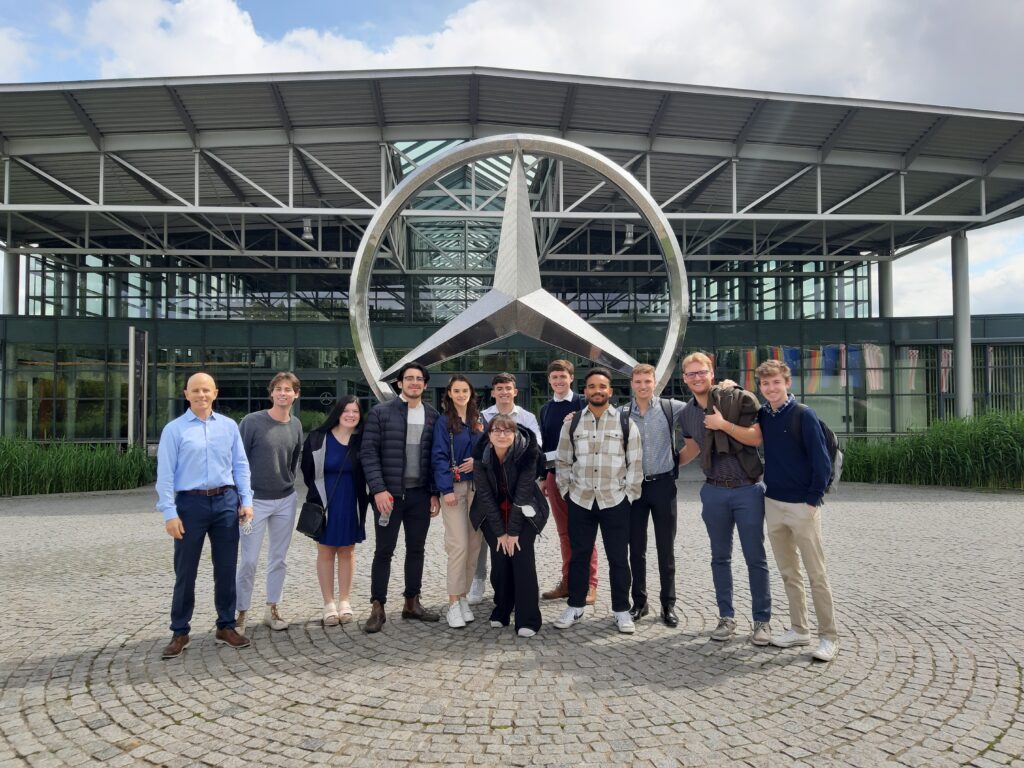 “My time in Bremen, Germany with the GIS program was for sure a time to remember. The Dickinson Program and students currently studying abroad were extremely helpful in preparing us and making a country I have never been to feel like home for two weeks. I was amazed at learning the German culture and learning a bit of the German language on the side. As I had never been to Germany before, I had a wonderful time taking in every experience. Our time visiting local businesses was very eye opening into the global markets and the ways COVID-19 altered business outputs/operations.” (William Giguere ’23) 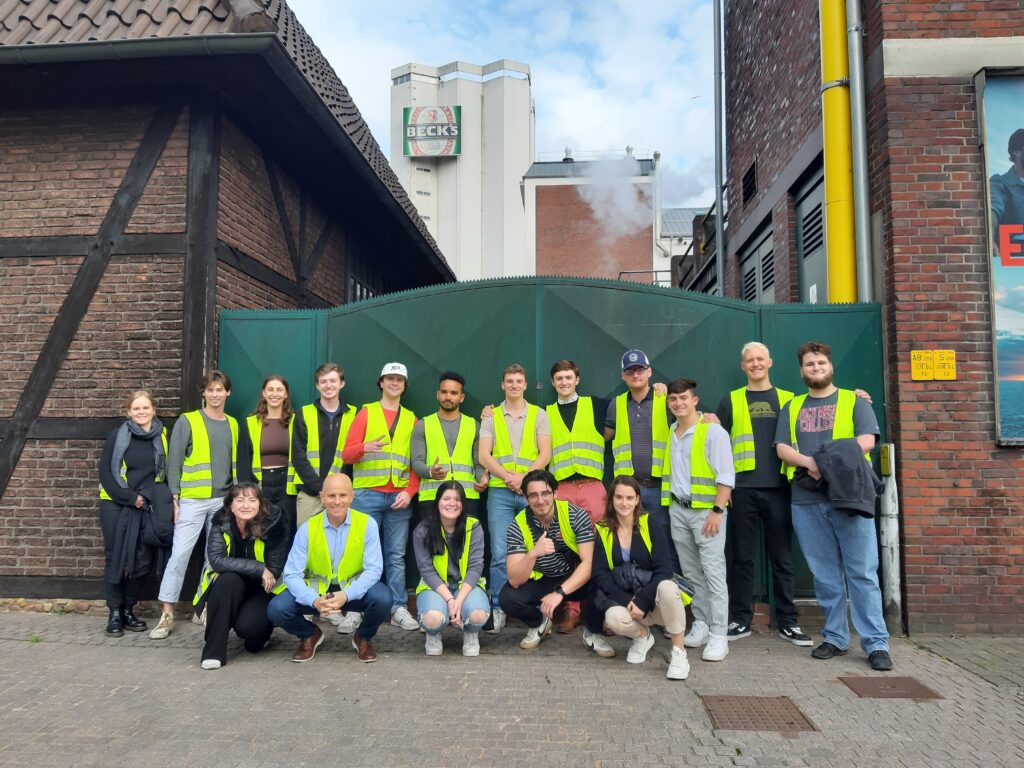 As part of the GISEB (Globally Integrated Semester on Entrepreneurship in Bremen) program, we recently had the pleasure of welcoming some great visitors to Bremen! Check out these wonderful photos, taken by participant Sierra Stevens! Stay tuned for more photo and video content! 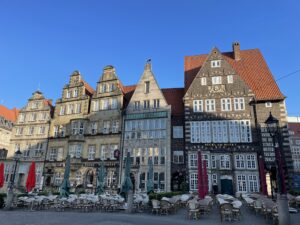 This is what Sierra had to say about her 2-week stay in Bremen: 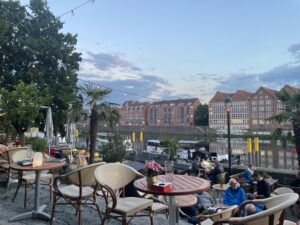 “I was initially very nervous about traveling to Germany. Not only had I never traveled out of the country, but I also didn’t know any German. Sophie’s expertise (an exchange student from Bremen University) calmed my nerves a bit, but I was still anxious about the trip.
However, the minute I landed in Bremen and boarded the tram, I knew it was going to be an incredible trip. Everyone was incredibly welcoming, kind, and understanding about our lack of knowledge concerning the German culture and language. 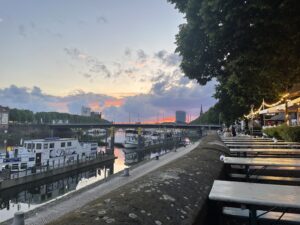 The food, despite its surprisingly low cost, was incredible. I am a very picky eater, but I didn’t have a single meal that I disliked. Even the cafeteria food at the University of Bremen was delicious. The Dickinson-in-Bremen program treated us to a number of meals at luxurious restaurants and cafes, assisting us through our interactions and ensuring we acted in a 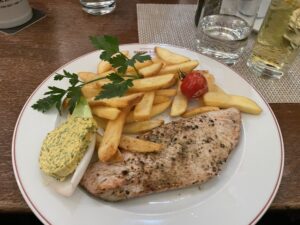 respectful manner.
The program assistant and academic director of the Dickinson program in Bremen were especially helpful. Leandra handled our large, occasionally rowdy, always tardy, group with ease. She treated us as friends and offered earnest recommendations daily. I am thankful for her friendliness and diligence. Dr. Ludwig was equally as supportive, giving us informative lectures on German entrepreneurial history, the country’s opinions on America’s contemporary issues, and instructing us on how to behave in a “German” way. She was always enthusiastic in answering our many questions and was clearly passionate about her job. She truly wanted our group to have a wonderful experience (and that we did). 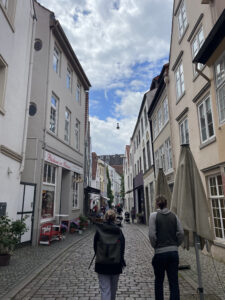 Our itinerary was packed with business visits and informational sessions, with plenty of free time mixed in. Some of the highlights included a tour of Mercedes Benz, a visit to Beck’s Brewery, meeting with members of the Bremen Senate, the Emigration Museum in Bremerhaven, exploring the restaurants and gift shops in the Schnoor and the Schlachte, as well as our trip to Berlin.
There is plenty more I could say about the experience, but I will end it with this. I had an extraordinary time in Germany and I will definitely be back. This trip is one that I will remember forever.”
Photo credit: Durden Dickinson Bremen Program 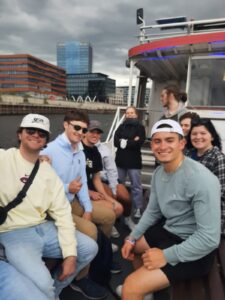 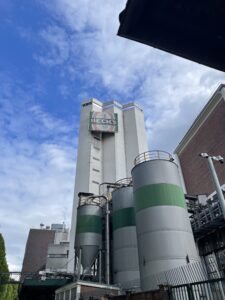 On Friday, May 21st, Nick and I decided to participate in the Bremen Nachtlauf. The Nachtlauf translates to night run, which is a city-wide event, where many people in Bremen choose to run a 5K, 10K, or a half marathon. Nick and I decided to make a bold move which was to run a 10K. I personally have never run that much in one run before. And I for one can say I am not the best runner in the world. My rugby coach once said : “You’re a tackling machine, but you have the speed of a trashcan.” So, I’m not going to lie, I was a little nervous, but I was also excited.

For two weeks before the event, Nick and I decided it would be in our best interest to train. Each day we would tell each other how much we ran that day in preparation for the event. Soon enough, it was already game day. The weather was terrible. Super windy and rainy. Earlier in the day Nick and I made another bold move, which was to attend rugby practice. And almost immediately after rugby practice, we had to run the 10K.

The race was accelerating. We ran across a majority of Bremen. Even though I have been here already for almost 4 months, it was nice to get another tour of Bremen. It was one of the most physically challenging things I have ever done and I am proud to say that both Nick and I were able to complete it. Nick may have edged me out by a little bit, but I would say it was a pretty good competition.

After the race, our friend Andrew was there to cheer us on and celebrate with us. We had some beers and then headed home, where I treated myself to a homemade Philly Cheesesteak. This was also another awesome experience that I will never forget and I don’t think this will be my last 10K I run! 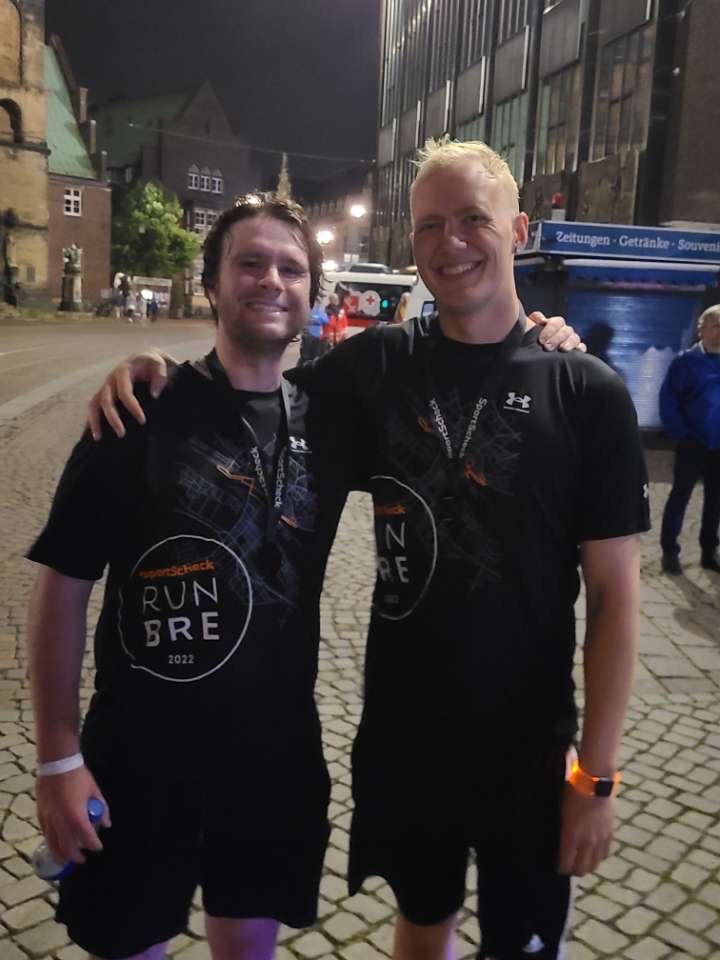 Originally, I had intended on attending the game in person, but unfortunately, something went wrong with my tickets, and I wasn’t able to attend. Luckily, I, Nick, and Amanda went to one of our favorite local bars, Oililio, to watch the game. We had a blast watching Werder Bremen win and having a few beers!

After the game had ended, we decided to take the tram to the Bremen city district “Viertel” (“Quarter”) to see if the city was celebrating. It was an all-out party, with what I imagine most of the city of Bremen celebrating. It was awesome, everyone was singing, dancing, having beers, and there were even the occasional fireworks set off.

Later in the night, people started moving towards the end of the Viertel and we were not entirely sure why. It soon became apparent though because the entire Werder Bremen soccer team was coming through the city on a bus celebrating. They were having the times of their lives! After many hours of celebrating and meeting new friends, we all called it a night and headed back home. It was truly and electric experience that I will remember for the rest of my life. 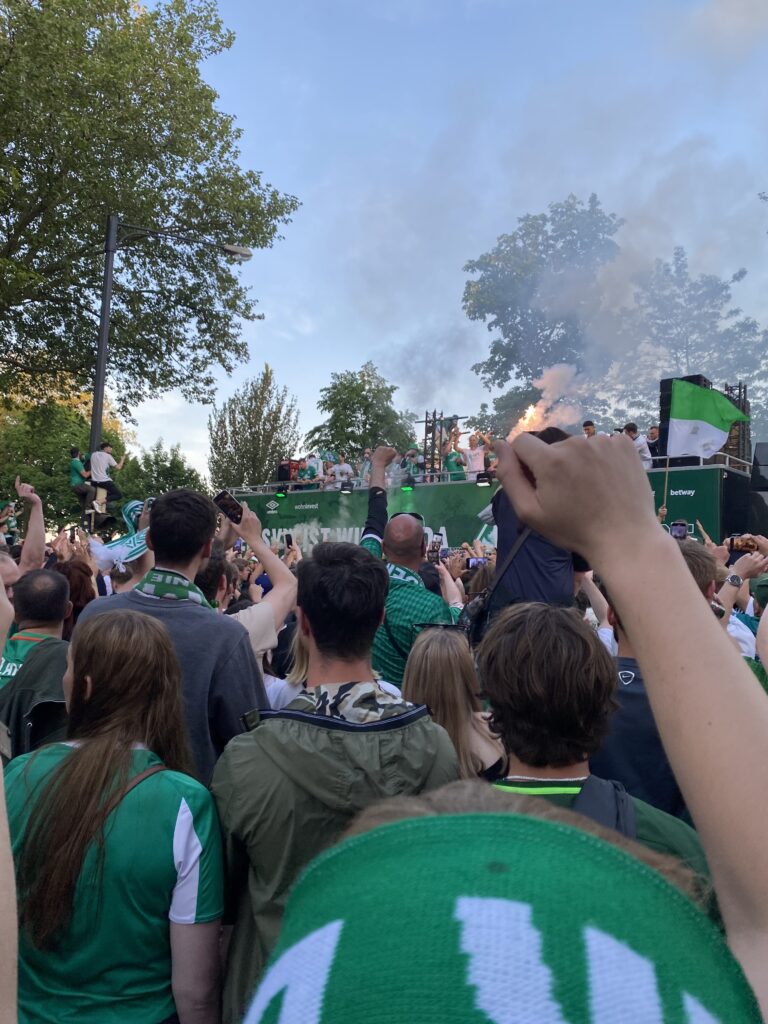