On May 19, 2019, we had the great pleasure to visit Dr. Rudolf Seiters who had been the Federal Minister for Special Affairs and Head of the Office of the German Chancellery of the FRG under Helmut Kohl from April 1989 to November 1991. In this position, he successfully negotiated with the GDR government under Erich Honecker the passage of the East German refugees in the West German embassy in Prague to the Federal Republic of. He was responsible for diplomatic relations with several major East German governmental figures during the 1989 revolution (Honecker, Egon Krenz, Dr. Hans Modrow) and later involved in negotiating the contract for German Unification. Dr. Seiters discussed the events of 1989/90 with our students and shared deep political insight into the highest positions at the time. We found him to be a wonderful person, who was able to convey serious historical information in a very compelling way. For instance, he described how he took over his position and all the files from Wolfgang Schäuble in April 1989 after being alerted about the most pressing issues – there was no mention of the GDR at the time. Nobody knew what was coming and how drastically things would change just a few months later. He also relayed the anecdote of how an employee asked him on the afternoon of November 9 whether he could leave early for his child’s birthday. He said, “Sure, nothing much will happen today anymore.” Little did he know that that night the Berlin Wall would fall. His honest and entertaining way of explaining political work from an insider’s perspective was most intriguing to our students – some of whom had already met former East German Head of State Dr. Hans Modrow and heard about many of the same political events from a West German perspective.

In 1991, Seiters became Minister of the Interior, a position from which he had to step back in 1993 because RAF terrorist Wolfgang Grams shot himself in Bad Kleinen, although it was widely agreed that Seiters had done nothing wrong. From 1998 to 2002, Seiters was Vice President of the German Bundestag and until 2017 President of the German Red Cross.

It was a wonderful opportunity for us and very kind that Dr. Seiters and his wife, despite busy calendars, hosted us in their house in Papenburg, a small town roughly two hours away from Bremen. After that meeting, we visited the “Van Velen Complex,” a settlement of mostly tiny houses and cots from the 17th century – in a town that was built on dried marshland. After that the long day, some of us went to see our beloved soccer team Werder Bremen who happened to play a friendly match that day against SC Blau-Weiß 94 Papenburg – on a small playing field that allowed us to see the likes of Claudio Pizarro, Max Kruse, and Josh Sargent close up. Here is a short video of a corner kick from that match: All of the students in the Dickinson in Bremen program decided, in February, to run a 5k. It was on a Friday in mid-May at around 8:30 pm, starting at the town square. It was not raining, which was surprising considering the run was in Bremen. None of us had done any real training for the run, so everyone was a little nervous of how it was going to go. By the end though, I thought it was a success. The route the 5k took was through the city, and it was very nice to run across bridges and other areas of the city around the river where I hadn’t been before. When we finished the run, we were given a free alcohol-free beer, some pretzels, and some water (and also a free T-shirt and string bag) by the organizers of this public event. I thought it was a fun experience, and a good way to see more of the city. 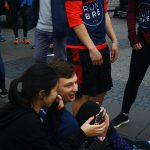 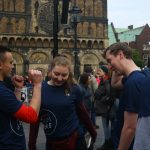 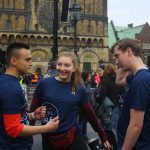 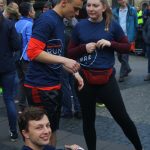 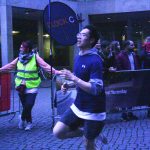 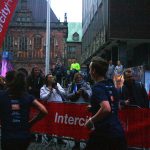 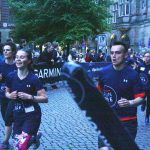 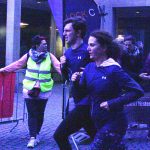 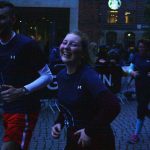 Along with many other changes you face when you study abroad, food is something that you have to consider when moving to a completely new country. At Dickinson, we have many different on-campus food options that are included in our meal plan and most of them are open all day, every day. It is not difficult at all to find prepared meals that are basically already paid for with swipes or flex points. At Uni Bremen, however, we have the Mensa, or main cafeteria, (in addition to some smaller on-campus cafes) that offers lunch from 11:00 am to 2:00 pm Monday-Friday and there is no pre-paid swipe system like Dickinson’s meal plans. So what do you do for breakfast, dinner, and weekend meals? You cook! It depends on the person, but some students prefer to cook most of their meals, while others enjoy cooking some and eating out at restaurants for others. But while it’s nice to go to restaurants and eat delicious German food, it’s not exactly realistic to rely on that for every meal.

Luckily, Dickinson arranged a cooking workshop where we learned how to cook easy and cheap, yet healthy recipes. Together we made smoothies, pasta salads, chicken curry, and quinoa dishes. I personally love cooking and trying out new recipes, so this workshop gave me new ideas of dishes to prepare. It was also helpful to talk about shopping for ingredients and how to get the most out of your groceries. Produce and fresh food is relatively inexpensive in Germany and it’s easy to make meals using organic fruits and vegetables. In addition to learning how to cook in Germany during this workshop, we all had a great time cooking and eating together! 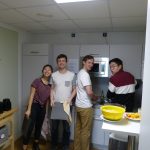 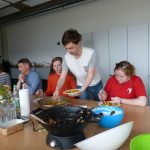 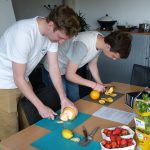 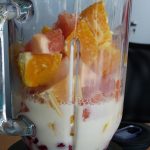