In response to the pandemic, Dickinson College developed the innovative format of the Globally Integrated Seminar (GIS) with many of our study-abroad sites. For Bremen, we were conducting a class on “Germany and the Cold War” this spring semester.

This seminar covered political and cultural developments in Germany throughout the 20th century. Through critical engagement with texts, documentaries and films, we tried to understand how people have felt about their times and the future, about modernity, about the block confrontation, their governments, and much more. We also occasionally examined the images of America that Germans produced at different times. The division of Germany, Europe and the world into East and West was discussed up to the revolution of 1989, which contributed to the fall of the Soviet Union and led to German reunification as well as the eastward expansion of the European Union. We started with the German Empire around 1900, World War I and the Russian Revolution, continued with World War II and the separation of Germany and then delved into the history of the two Germanies. Finally, we analyzed the peaceful revolution of 1989 and German runification as well as Ostalgie (nostalgia for the East). Every week, the students wrote a blog post answering a specific question realted to the readings. While we were watching films, we chatted and commented on what we saw or discussed questions that occured.

In order to offer international experiences and discussions to our students, we invited several high-level German guests to the sessions. Among them was Egon Krenz, Head of State of the GDR in the fall of 1989, who answered critical questions, for instance about his current judgment on socialism, about the moment he realized that his government was losing control and why he thinks the socialist Eastern Bloc eventually lost the Cold War. He described how accidental the fall of the Berlin Wall actually was and what the immediate Russian reaction was that he received. 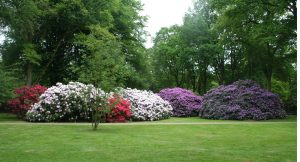 At the Rhododendronpark in Bremen, visitors get to enjoy one of the largest collection worldwide of these unusual, beautiful flowers: The park offers over 1,000 types of Rhododendron and Azalea bushes stretched over 46 hectares of parkland!

We highly recommend you to visit the park in the month of May: During this time of year, the Rhododendron starts to come into full bloom and shows its many vibrant colors.

If you already want to have a sneak-peak, check out the park’s 360° tour: