I wanted to get a tattoo while in Germany, but instead I got my COVID-19 booster shot.

That’s really not a sentence I ever envisioned myself saying when I dreamt of going abroad, first as a prospective Dickinson student and then as a first-year and sophomore pre-pandemic. However, like everyone else in the past two years, what I dreamt of and what I experienced were two very different things. I’m glad that I got the chance to spend 21 weeks in Germany though, across a stretch of time that saw the country choose its first new Chancellor since 2005 and weather a second winter of a global pandemic. 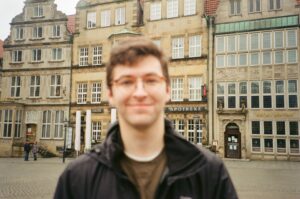 At Dickinson, I’m majoring in International Studies and in German, but my experience out of the United States amounted to less than a week spent between Victoria in British Columbia and a jaunt across the New York-Canada border to see the Canadian side of Niagara Falls. Flying in and out of the Frankfurt airport represented the first and second international flights of my life.

In Heidelberg, Berlin, Bremen, and all the other places I visited in Germany, I enjoyed the feeling of being somewhere vastly different than my usual haunts in Massachusetts and Pennsylvania. I loved walking through the Bremer Altstadt, up the winding roads leading to the Heidelberg Schloss, around the Brandenburg Gate, and up countless stairs to get views overlooking Köln, Leipzig, and Dresden. I listened to a choir perform in Leipzig’s Thomaskirche and to trumpet sonatas performed in the Bremer Dom. And amongst other places and things, I also looked for scenes where old things and modern things were next to one another, like the cranes towering over Hamburg or the City-Hochhaus tower looming over the New Town Hall in Leipzig. 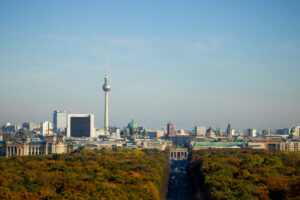 Oftentimes in city centers in Germany, if you sound like an American tourist, people will respond to you in English. However, I’m quite proud that the grocery cashiers and coffee shop baristas rarely switched from German when talking with me. I became confident enough with traveling by train and tram too, that, multiple times, I was approached with questions about directions and train arrival times and whether certain tickets worked with Deutsche Bahn or not. I usually stumbled through my German responses, but I always felt flattered that at least it seemed like I was from around there.

I also ate a lot of great food and pushed myself to avoid any US-based fast food (except that one chicken sandwich from McDonald’s that tasted better than any McDonald’s I’d had before). I developed a love for cappuccinos, Schnitzel, Döner, and Radler. I collected souvenir mugs from four different Christmas markets. I experimented with multiple ways of how to make home fry potatoes, which jam to buy for my traditional German bread, and how to best budget my Euros between Aldi, Rewe, and the other grocery stores. I figured out how to get free COVID tests in the Winter too, as cases rose and 3G rules became 2G rules. 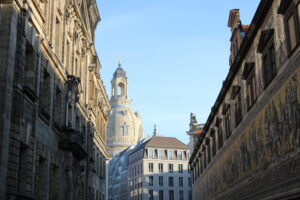 What I most appreciated about my time abroad, though, was the separation from my normal life and usual perspective on things. It was a double-edged sword, as I did find being away from my usual support system quite difficult, but I also learned about myself as I was able to view my life in the US from an almost third-person perspective. I thought a lot about how I’d ended up in Germany, how I’d become who I am, and what I want next from myself. In my classes, I learned about the last century of international relations from a German perspective, discussed the history of the relationship between Germany and the US, and examined the histories of immigration and the social welfare state within Germany.

I also met a lot of people, including people from Germany, Austria, Vietnam, India, and Alabama. I had great conversations about cultural differences such as how Uni Bremen differed from Dickinson, went to a science talk auf Deutsch in a bar, made German food with my roommates for a Christmas dinner, and attended a Werder Bremen game in the fans’ standing section behind the goal. Since I went to see Werder Bremen play, on the day that both their head coach and assistant coach resigned due to fake COVID vaccination cards, they’ve risen from 11th in the 2. Bundesliga table to 2nd with four games left to play. 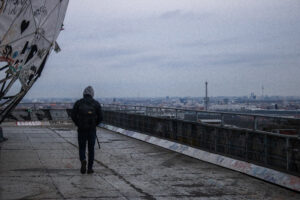 Throughout my time abroad, I took a bunch of photos and expanded my knowledge of popular German music. I also developed a closer relationship with my parents, despite being an ocean apart. I hosted my girlfriend, who I originally met in a German 101 course, for Christmas break, and showed her around Bremen and Heidelberg. And, lastly, I learned how to wear a scarf properly, bought a turtleneck, and once walked over an hour from the city center to my WG in the dark with my roommates after we accidentally missed the last tram of the night.

So, I may not have a tattoo from my time abroad in Germany like I originally wanted, but I did do a heck of a lot and have memories just as enduring as a tattoo. I’ll just have to return at a later point to get that tattoo. Bis später, Deutschland.